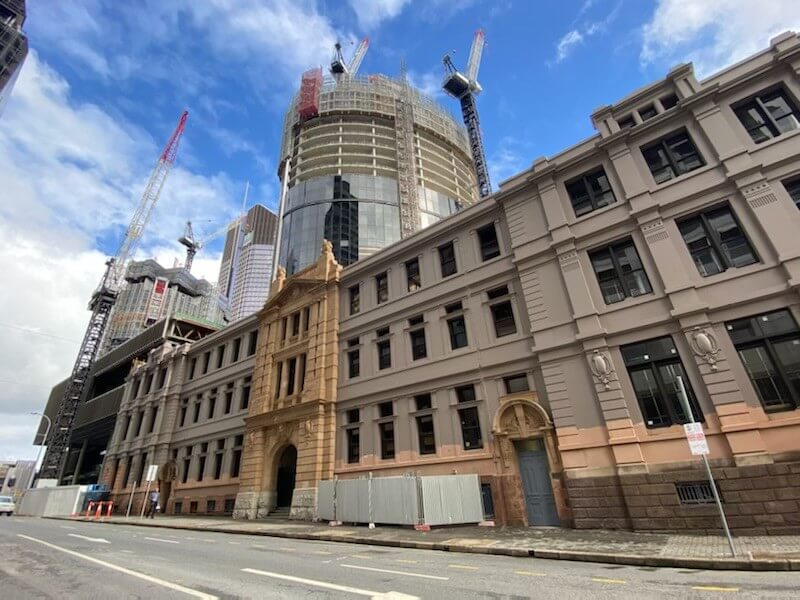 Brisbane’s historically rich city is undergoing a transformation not seen in decades as Queen’s Wharf mixes old with new along George and William streets.

The next stage of works will complement the current restorations made to heritage buildings in the Queen’s Wharf precinct including Harris Terrace, the former DPI building, and the former Printery Building.

The former Printery Building is almost ready for international luxury retailer DFS to take over and commence fit-out after impressive refurbishment works edge closer to completion.

Multiplex Project Manager Tyson Macdonald said the next stage of works on George Street will accompany the upgrades completed to the former Printery building which are now being revealed as scaffold is removed.

“The next stages of civil construction will start mid-year and continue to the fourth quarter of 2022,” Mr Macdonald said.

“The works area covers 11,000m² from William Street between Queens Gardens and the Integrated Resort Development and Stephens Lane.

“The George Street sections will extend along both sides of the street including footpaths from Charlotte to Margaret Streets.

“The works will be a mix of civil and landscaping works completed during general construction hours and out-of-hours when required.

“Where possible works will be done to ensure there are limited impacts to pedestrians and road users.”

Advance notice will be provided to businesses and near neighbours about these works.

Miller Park is currently undergoing upgrades which will include new timber terraced seating, DDA access including a ramp and lift, native landscaping and viewing platforms.

Landings and grassy terraces will connect William Street to Queens Wharf Road as it has done in the past – linking pedestrians to Brisbane CBD, the Bicentennial Bikeway or the North Quay Ferry Terminal.

Declared parkland in the 1980s due to its historical importance as the main point of access to the Moreton Bay Penal Settlement, Miller Park will continue to be the green heritage heart of the city once it’s re-opened in mid-2023.

Rolling out the red carpet