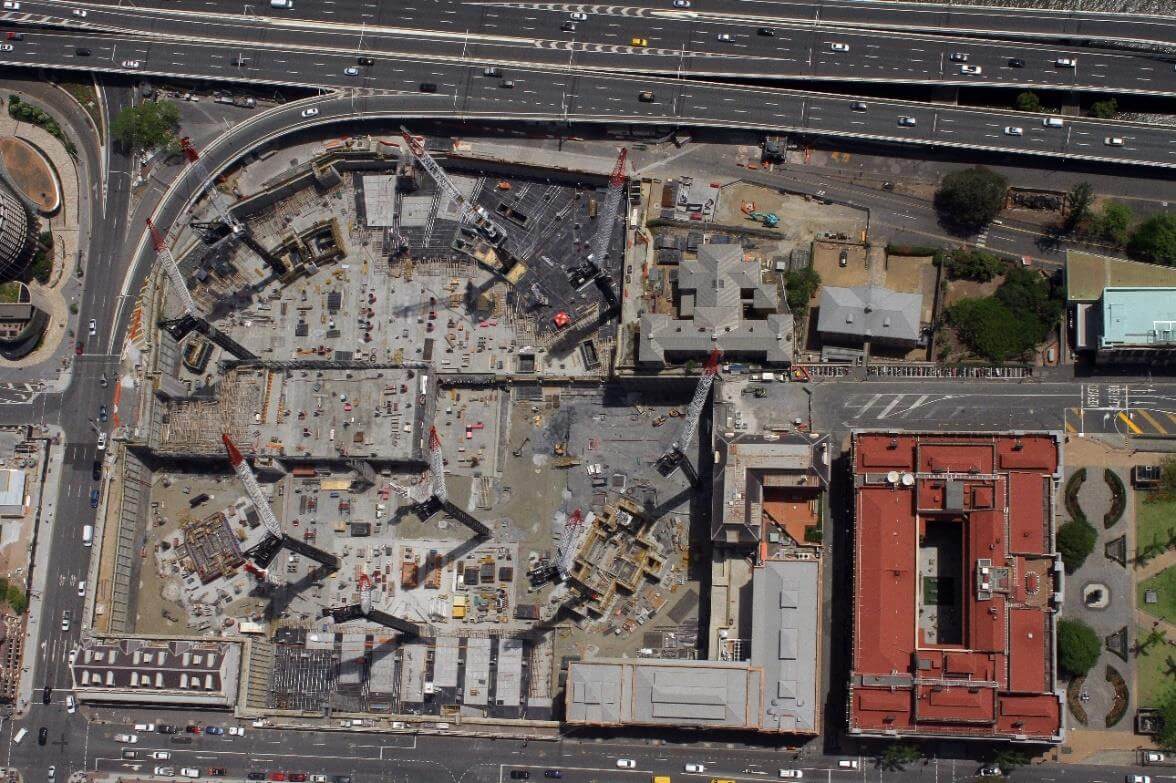 Underneath the four integrated resort towers and iconic Sky Deck of the Queen’s Wharf Brisbane development, five levels of basement are being constructed to cater for up to 2,000 car parks.

In July 2019, Multiplex took over the excavation site and began the massive task of building what is Queensland’s largest construction project.

Destination Brisbane Consortium Project Director Simon Crooks says that more than three Olympic pools worth of concrete has already been pumped into the basement build since Multiplex started.

“This year has seen a complete change in construction pace as the site went from removing close to 400,000m3 of material, of which 90 per cent was recycled, to commencing the build of what is currently the largest project in Queensland,” Mr Crooks said.

“The six satellite concrete pumps across site have been busy pumping more than 8,300m3 of concrete into the foundations.

“The nine tower cranes on site have been busy lifting everything from excavators to sheds as well as the more than 1,400 tonnes of steel reinforcement that has gone into the basements.

“We are now at level four of the car park basements under the east end of William Street and expect to reach street level around Easter 2020.

“As we look ahead, 2020 will be an amazing year for this development and the people of Brisbane will really start to see the immensity of what we are creating for this city.

“This time next year the podium levels will be well and truly sitting above George Street as we work towards completing the tower shells for fit out in 2022.”

In addition to the main works, attention in 2020 will turn to the public realm as construction of the pedestrian bridge to South Bank will commence and works for The Landing will continue.

“The Neville Bonner Bridge works are expected to kick-off with site establishment at South Bank in February 2020. Actual piling at South Bank is expected to start mid-year and we have been working closely with South Bank stakeholders to ensure our works and other works in the area cause minimum disruption,” Mr Crooks said.

“Marine works to build The Landing, which will be approximately 6,500m2 of public green space along a 300-metre stretch of the Brisbane River, will also continue next year.

“The newly created Mangrove Walk and upgraded Bicentennial bikeway that we opened in October this year is a great source of pride to the Consortium. Community feedback has been positive, and it seems the area is well utilised by workers during the week and families on the weekend.”