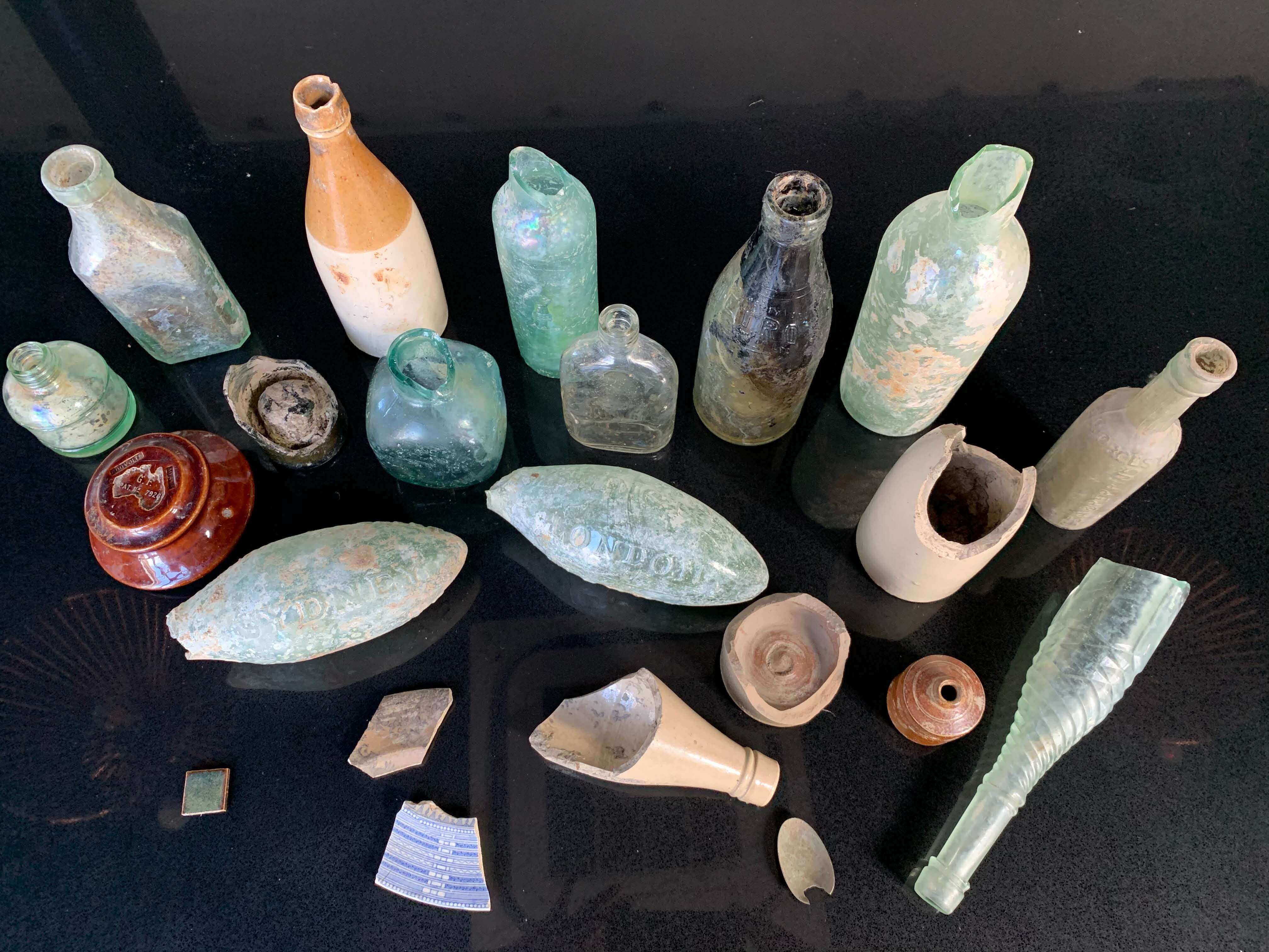 An oval-shaped ‘torpedo’ glass bottle that lies on its side and once held soft-drinks for Brisbane’s first European settlers is part of a collection of around 100 artefacts discovered beneath the site of the $3.6 billion Queen’s Wharf Brisbane development.

Destination Brisbane Consortium Project Director Simon Crooks said the artefacts – with the oldest being the Islington torpedo bottle manufactured by a British company around 180-190 years ago – were made from a mix of glass, earthenware and ceramics, and metals.

“It’s been incredibly exciting to uncover a range of artefacts from the past two centuries including fully intact – as well as fragments of – various plates, mosaic tiles, terracotta dishes, inkwells, champagne/wine bottles, milk bottles, and medicinal containers,” Mr Crooks said.

“These fascinating pieces of history were discovered during several stages of the development, starting in 2016 when we investigated some of the heritage buildings’ footings.

“Since then, further artefacts have been uncovered through the demolition and early works service diversion phase; bridge piling along Queens Wharf Road; bulk excavation works; and most recently, trunk sewer excavation along North Quay and Queens Wharf Road last year.

“We engaged cultural heritage consultancy, Urbis, to carefully extract and manage these artefacts in accordance with the Queensland Heritage Act 1992, so that future generations could enjoy them.”

Urbis Archaeologist Holly Maclean said the artefacts gave unique insights into the lifestyle back then such as the torpedo bottle, which held aerated or carbonated water.

“This style of glass, oval-shaped drinking vessel was popular in the 19th century and were made by a variety of companies,” Ms Mclean said.

“At the time, most bottles were sealed with corks, but when they dried out, the pressure and carbonation would be lost. Therefore, the torpedo bottles were deliberately designed to lay on their side, ensuring the cork would always stay wet and sealed.

“We also discovered earthenware bottles on the site, which were the predecessor to the glass torpedo bottle and were typically made in a plaster mould or on a potter’s wheel.”

Ms Maclean said the majority of the findings were uncovered during archaeological monitoring of the site, involving archaeologists on each excavation area to monitor mechanical excavation.

“This provided all the data needed to later help understand where the artefact came from, the site uses that could be interpreted from the find, and when these activities may have occurred.”

The Royal Historical Society of Queensland Immediate Past President Dean Prangley said the artefacts were evidence of European settlement on the north bank of the Brisbane River from 1825.
“The artefacts uncovered represent a timeline from convict days to the end of the 19th century,” Mr Prangley said.

“Brisbane will be 195 years old on 25 May this year, which was the date in 1825 when the first Commandant of the Moreton Bay penal settlement, Lieutenant Henry Miller, along with convicts and soldiers landed nearby to set up the new penal settlement on the Brisbane River.

“Over the next few years, significant stone buildings were erected during the reign of Commandant Patrick Logan, including the Commissariat Store completed in 1829, which today houses our Society.

“After free settlement in 1842, the precinct along the river held a range of wharves, warehouses, sawmills, and factories.

“Other fine accommodation buildings were erected in the precinct and most survive today.”

The Star Entertainment Group’s Group Executive Operations Geoff Hogg said the artefacts will take pride of place in the Queen’s Wharf Brisbane Visitor Centre, which will open in the CBD on 5 March.

“We firstly want to thank the Queensland Government for allowing us the opportunity to showcase these wonderful relics of our city’s past in our Queen’s Wharf Brisbane Visitor Centre,” Mr Hogg said.

“Located on the corner of George and Alice streets, guests coming to our visitor centre will get the chance to learn more about our precinct – both its captivating Aboriginal and European heritage as well as its game-changing future.

“The 11 heritage buildings and places within our precinct, which we will revitalise and re-open to the public, is part of our development’s unique story, and sets us apart from many contemporary integrated resorts around the world including the likes of Singapore’s Marina Bay Sands.

“We aim to transform many of these underutilised places into a variety of sumptuous food and beverage venues, and exciting tourism and retail experiences.

“However, the stories of what they used to be will remain an integral part of our precinct.

“By featuring these artefacts in our Queen’s Wharf Brisbane Visitor Centre, we’re giving locals and visitors an early taste of what’s to come.”

Some of the discovered artefacts that will be on display in the visitor centre include: