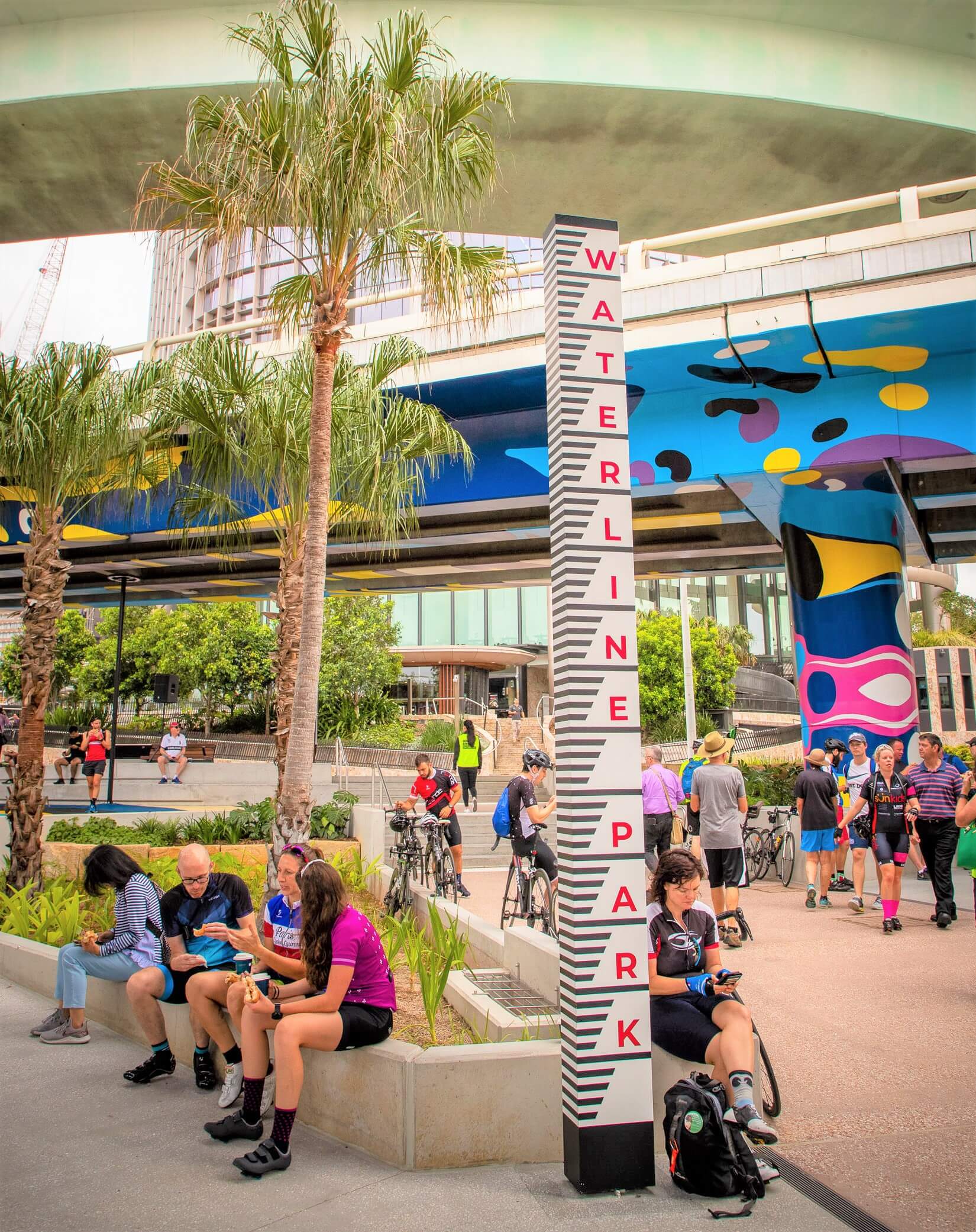 Well before Queen’s Wharf Brisbane’s expected grand opening in 2022, locals and visitors to the CBD have taken their first steps into an exciting new stretch of activated riverfront space – the first to open as part of the world-class $3.6 billion integrated resort.

This morning – Waterline Park, Mangrove Walk, and the first section of the Bicentennial Bikeway to be upgraded – were unveiled at a free community breakfast open day, following a makeover of the 500 metre stretch of land underneath the Riverside Expressway.

The Star Entertainment Group Managing Director and CEO Matt Bekier said the free community breakfast was a celebration of the exciting transformation that had taken place.
“When you look at these colourful and activated new spaces today, it’s hard to remember how tired and underused this area used to be,” Mr Bekier said.

“We are proud to officially open these new areas and invite the community to celebrate with us.”

Free personal training sessions were held on the new gym equipment in Waterline Park, along with rounds of table tennis on new outdoor tables installed within the park.
“We continue to work closely with a range of stakeholders as we build Queen’s Wharf Brisbane, and I want to thank those who have been on the journey with us – including QUT, Bicycle Queensland, and bikeway users – whose feedback and suggestions for these first few areas were greatly appreciated,” Mr Bekier said.

“From taking a leisurely stroll along Mangrove Walk while learning about the area’s Indigenous people, to staying active in Waterline Park, or cycling a safer and more seamless route along the upgraded bikeway – we hope people enjoy exploring these new spaces.

“They also include new public artwork, Indigenous totems sandblasted along Mangrove Walk, and a colourful art mural underneath the Riverside Expressway by Australian artist Alice Lang.”

Some of the remaining art pieces include Australian artist Emily Floyd’s ‘The Kingfisher’ – a statue of the Kingfisher bird known to live amongst mangroves and nearby forests.

Another is the ‘Five Senses’ poem etched into Mangrove Walk, which uses 3-metre tall letters that spell out the words ‘ALL SHAPE’ to create an above-water seating area.

Bicycle Queensland CEO Rebecca Randazzo welcomed the opening of the upgraded bikeway and other facilities.

“This project transforms this part of the Bicentennial Bikeway to a world-standard, and it improves the safety and amenity of this space for all users – bike riders, walkers, and early morning exercisers,” Ms Randazzo said.

“This is one of the busiest bicycle and pedestrian spaces in Brisbane, and this project has made a dramatic improvement to both its usability and its capacity for growth.”

Mr Bekier said the new public spaces provided a taste of what’s to come as part of the multi-billion-dollar development.

“Queen’s Wharf Brisbane will offer a range of other revitalised spaces including the cluster of nine heritage-listed buildings in the area, which will be carefully restored and brought back to life,” Mr Bekier said.

“We are proud that one of these buildings – the former Treasury Building that currently houses our Treasury casino but will become a high-end department store – picked up the ‘Gold’ award for ‘Conservation Works’ at the 2019 National Trust of Australia (Queensland) Heritage Awards last night.

“This is an example of the high standards of revitalisation work that we are committed to delivering so that we achieve a world-class tourism, leisure, and entertainment destination that all Queenslanders can be proud of.”

Mangrove Walk:
• A 450 metre above-water pedestrian walkway located between the Botanic Gardens and Queen’s Wharf Brisbane.
• Features an Indigenous message trail and Indigenous totems designed with the Turrbal and the Jagera people, a series of landings and lookouts with shaded seating nooks to enjoy the view, and an elevated pavilion.
• A food and beverage outlet located near the Goodwill Bridge-end of the walkway will open in 2020, featuring a launching facility for small non-motorised crafts such as kayaks and canoes.

Waterline Park:
• A subtropical recreational park located on the riverfront behind the government tower at 1 William Street.
• Features grass and shaded seating areas, outdoor exercise equipment, and outdoor table tennis equipment.
• A unique Queensland-inspired artwork designed by Australian artist Alice Lang that spills from underneath the Riverside Expressway down onto the ground to create a colourful inviting oasis in the CBD.

Bicentennial Bikeway upgrade (an upgrade to first 500 metre section of bikeway, stretching from Queen’s Wharf Brisbane to the Goodwill Bridge):
• This highly used section of the bikeway had not been revamped since it was first built in the early 1970s.
• The upgrade has increased the cycle lane width to a segregated three metres, improved the lines of sight, and removed dangerous pinch points.
• A two-metre-wide separate pedestrian path has also been built alongside the bikeway, in addition to Mangrove Walk.
• Now complete, this first section of bikeway will be followed by a phased upgrade of the bikeway all the way to the Victoria Bridge. In total, one kilometre of bikeway between the Goodwill and Victoria bridges will be enhanced as part of Queen’s Wharf Brisbane.