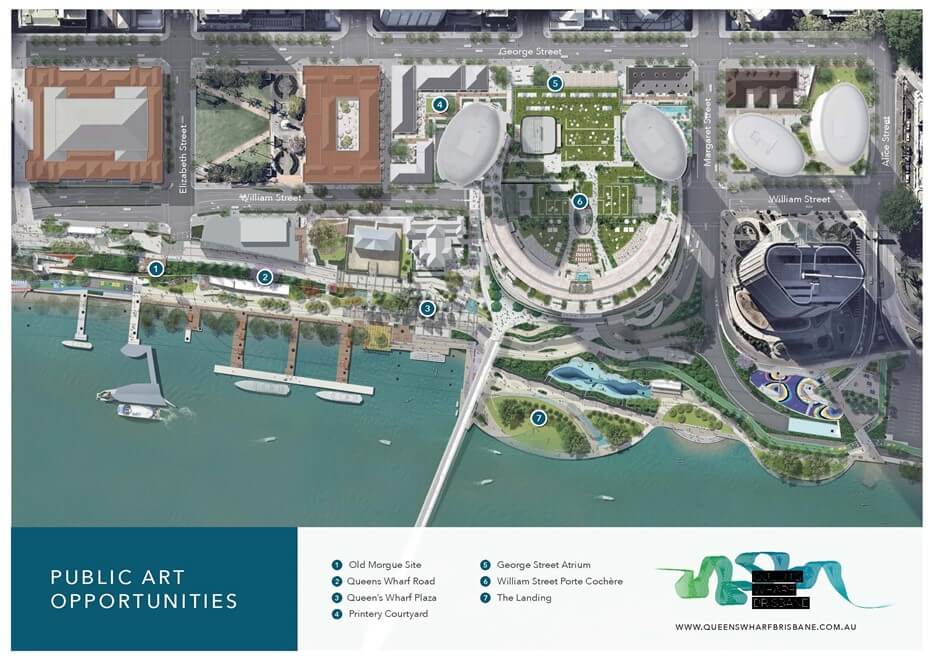 Queen’s Wharf Brisbane is offering homegrown artists a once-in-a-lifetime opportunity as a multi-million-dollar search commences for showstopping installations to go on permanent display in the precinct.

Contemporary masterpieces are being sought for placement in a series of outdoor locations that will be peppered across the 7.5 hectares of public space included in the $3.6 billion project.

The art procurement process kicked off by Destination Brisbane Consortium today is one of the biggest undertaken by a corporate entity in Queensland.

It presents local artists with an unforgettable chance to have their work commissioned and showcased to the millions of Australian and international guests set to visit the transformed precinct once it opens late next year.

A robust selection process has been established to ensure each of the areas earmarked for installations will deliver prominent and memorable artworks with authentic storylines of domestic and international interest.

“We are encouraging the Australian art community to get imaginative and think about how they can really put their stamp on Queensland’s largest urban development project by creating great destination pieces,” said DBC Project Director Simon Crooks.

“More particularly, we want to attract local contemporary and Indigenous artists. This is a multi-million-dollar commissioning process. It has the potential to provide a massive stimulus to the Queensland arts and culture sector.

“Our aim is to make Queen’s Wharf one of Brisbane’s genuine art tourism drawcards. Clear guidelines are in place as part of the selection process to ensure a Queensland theme and flavour is also highlighted through the art works.”

The Star Entertainment Group is the lead partner in DBC, a joint venture with Chow Tai Fook and Far East Consortium.

“We are creating a world-class tourism and entertainment destination in the heart of the CBD and art in all its forms will play a huge role in our offerings.

“This commissioning of permanent installations for the public realm areas is just the start. We want to embrace and foster Queensland’s arts industry long-term.

“The Star wants to complement and support those who have led the way in the Queensland arts community and we have the ideal ‘urban canvas’ to work with. Queen’s Wharf will deliver around 1.4 million additional visitors to Brisbane each year,” he said.

Premier Annastacia Palaszczuk said the government had provided strong support for Queen’s Wharf to continue construction throughout the pandemic.

“We’re partnering with the private sector to build new infrastructure that create jobs and opportunities for Queenslanders,” she said.

“This is at the core of our economic recovery plan – creating even more local jobs.

“To see cranes in the sky and plenty of workers on site at Queen’s Wharf right throughout COVID-19 is proof of economic confidence here in Brisbane.

“Our arts sector has been hard hit throughout this pandemic.

“The chance to work on the state’s largest ever tourism infrastructure project is a great opportunity for Queensland artists,” she said.

A selection panel will be announced in coming weeks, supported by a Specialist Artistic Advisory group which will be headed by one of Australia’s most respected art figures, Philip Bacon AM.

Mr Bacon, a Board member of Opera Australia and the National Gallery of Australia Foundation, was made a Member of the Order of Australia in 1999 for service to the visual and performing arts as a benefactor and supporter.

In 2001 he was awarded the Centenary Medal for distinguished contribution to the visual arts in Queensland.

“The arts have always been central to my life,” he said. “So, it is particularly exciting for me to think that the arts are to be such a major component, indeed, a point of difference, in the extraordinary development that is happening at Queen’s Wharf.

“With Australia’s largest, and might I say, most successful cultural precinct just a short walk across the river, it is a brilliant idea to have the arts, and not just the visual arts but the performing arts as well, front and centre in this multi-billion dollar transformation of Brisbane’s cityscape.

“The statistics are mind boggling, with an estimated 1.4 million visitors per year visiting this mini city of hotels, restaurants, shops and other attractions. How wonderful it will be for them to see, touch, interact and wonder at the genius of our Queensland artists, on display and an integral part of the whole experience.

“For that is what tourists now want, and expect, when they travel, an experiential holiday that provides them a true sense of where they are now, and how it differs from where they have come from. They are going to get that at Queen’s Wharf in spades.

“I am truly excited to be part of the journey that the Destination Brisbane Consortium has embarked on with such style and panache, and can’t wait to hear people say to each other, ‘Wow, have you seen the Art at the Star’?”

Mr Crooks said the Expression of Interest process for the public realm art would take several months, with a shortlist to be finalised and a concept stage embarked upon before the final winners were announced.

“We expect thoughtful, interesting and world-class artworks,” he said.