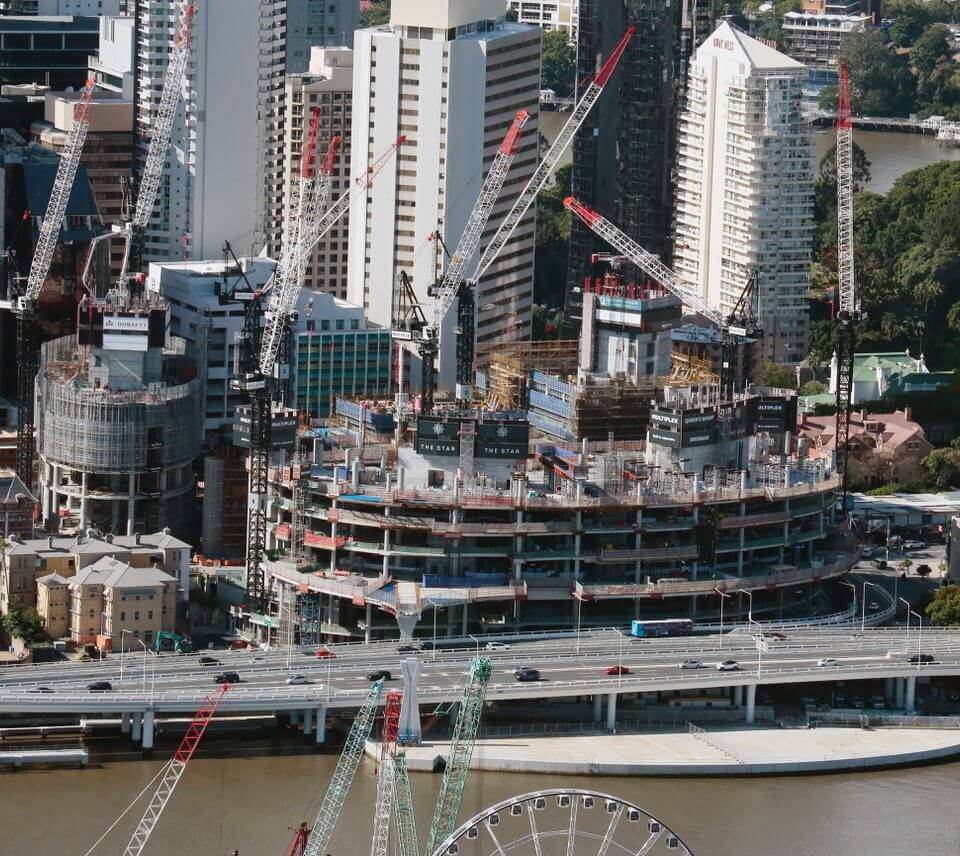 As a place to explore in the future with luxury retail, sensational restaurants and bars, stunning green spaces, and thrilling entertainment, the beating heart of the transformational Queen’s Wharf resort development is continuing to take shape along Brisbane’s city skyline.

In less than 18 months, the first stage of the $3.6 billion integrated resort will open, launching a new destination and a new tourism and hospitality era for the sunshine state’s capital.

Never seen before on this scale in Brisbane, a once underutilised area of the city will become one of the most captivating future attractions in South East Queensland.

Principal contractor, Multiplex, is approaching some exciting milestones in the coming months – including connecting the resort overhead on both sides of William Street, starting work on a 2,000-seat ballroom, and installing the exterior façades.

Multiplex Project Director Dayne May said the structure is now sitting 43 metres high above George Street and will accelerate upwards this year when the tower structures start taking shape.

“One of the exciting aspects about this build is the size of each podium level – the floor space delivered on each one is 16,500m2 – that’s the equivalent to the total floor space typically found throughout an average-sized 16-storey building,” Mr May said.

“Meanwhile, the five basement levels will cover a floor space of 90,000m2.

“In the coming months, the tower structures of The Star Grand hotel in the arc-shaped building, and the Queen’s Wharf Residences, will start to take shape.

“The combined Dorsett and Rosewood hotel tower is already visible and will continue to rise in the coming months as well.”

Meanwhile, earlier this week, the first façade elements were installed on the podium structure, to the side facing South Bank, with the work to become more visible to passing traffic as it progresses.

Structural steel is also being installed for the resort’s future ballroom, which will be housed on level 6 of the Podium. Once complete, it will host amazing events capable of catering for up to 2,000 people at a time. In anticipation of some of the red-carpet events likely to occur, broadcast network cabling will be installed through to the loading dock to support the broadcast needs of television networks.

The $3.6 billion Queen’s Wharf Brisbane development is being delivered by Destination Brisbane Consortium – a joint venture led by The Star Entertainment

To learn more about Queen’s Wharf Brisbane, visit www.queenswharfbrisbane.com.au and/or our Facebook page www.facebook.com/queenswharfbrisbane/. For construction related enquiries, contact Multiplex either via phone 1800 931 760 or ema