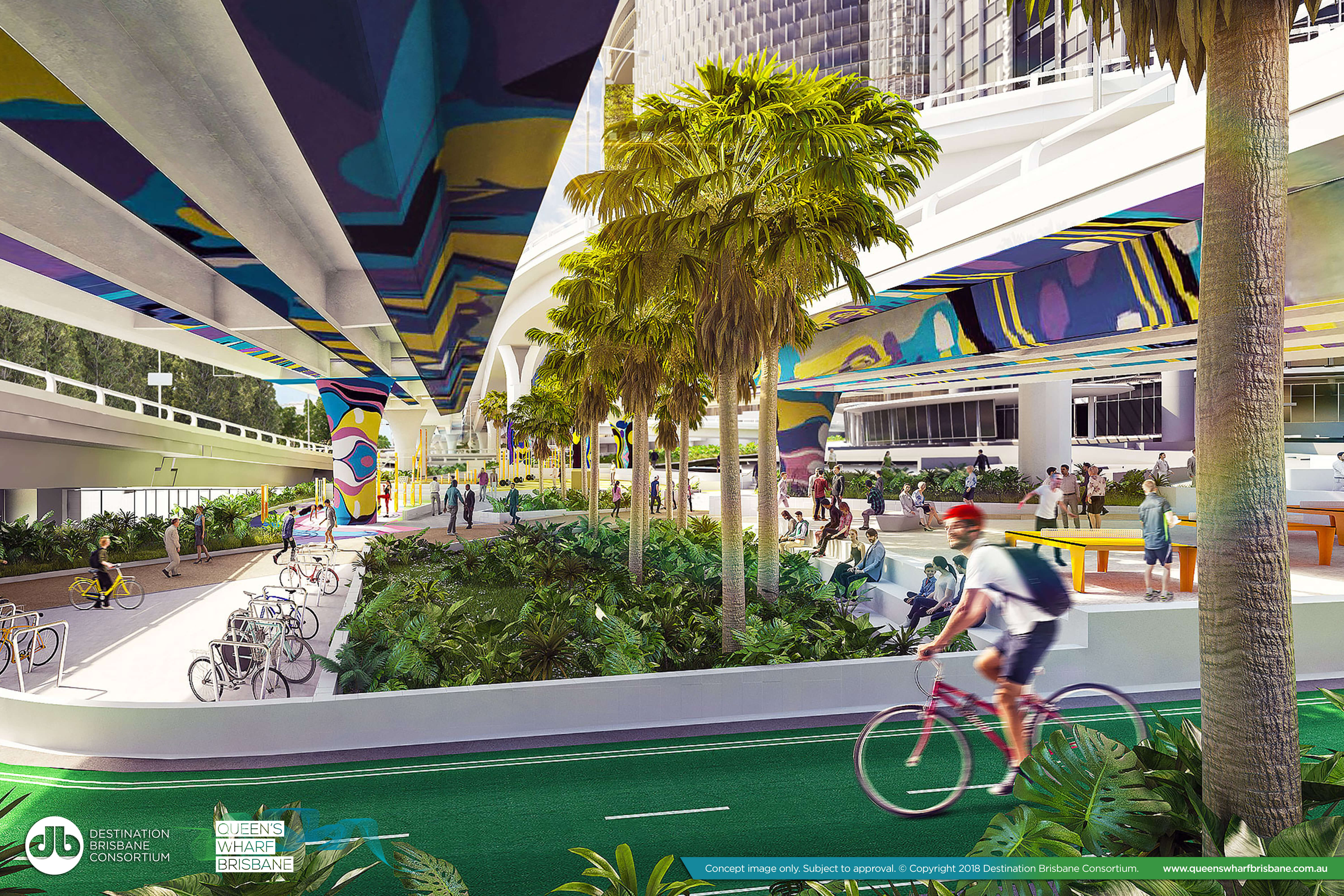 The transformation of Brisbane’s riverfront opposite South Bank is now underway, with two barges arriving and work crews starting activities to create a vibrant new public space as part of the $3.6 billion Queen’s Wharf Brisbane development.

The two barges are now in place in the foreshore area between the Goodwill Bridge and the government tower at 1 William Street, and will be used to construct a 450 metre above-water pedestrian Mangrove Walk and a new public recreational area called Waterline Park.

Meanwhile, a colourful art treatment to the underside of the Riverside Expressway is being applied and will provide a gradual reveal of an exciting mural makeover to the roadway columns and overhead areas over the coming weeks.

“The first works will be to construct temporary river-based work platforms and prune the existing mangroves before we start to build the walkway,” Mr Crooks said.

“The Mangrove Walk will provide an alternative path from the Botanic Gardens to Queen’s Wharf, with interpretative heritage, integrated story-telling elements and additional mangrove plantings and a rejuvenation program in the area.

“The barges will be used for piling work to construct the walkway structure, followed by crane work to lift pre-constructed sections of the Mangrove Walk into position.

“The contractor, Multiplex, is using the river as the main transport corridor and work platform to ensure there are less heavy vehicles on our CBD roads.”

Mr Crooks said the river’s edge construction works will occur over the next 12 months to enable Mangrove Walk and Waterline Park to open in the second half of 2019.

“These will provide new public areas to enjoy along the riverfront long before the Queen’s Wharf Brisbane development is expected to commence opening in 2022,” Mr Crooks said.

“They will be some of the new free public spaces that we are creating across our development, which will ultimately provide the equivalent of 12 football fields of new public realm in Brisbane’s CBD.

“Meanwhile, work has already started to upgrade the first section of the Bicentennial Bikeway to a dedicated 3-metre-wide bike path and 2-metre-wide pedestrian path between the Goodwill Bridge and 1 William Street. Upgrades will continue to the bikeway across the full one kilometer length of the Queen’s Wharf Brisbane development.”

“The first of these panel-selected art pieces is the highly colourful mural that is now being applied to the underside of the Riverside Expressway,” Mr Crooks said.

“Our panel chose the mural because it uses sub-tropical Queensland colours to portray the tidal changes of the Brisbane River, in a piece designed by Australian artist Alice Lang.

“We will announce further art work, and the locations where they will be installed, as selections are made.”

***Media materials: Time-lapse footage of Riverside Expressway underside art installation, artist impression of the final artwork, barge travel along the Brisbane River, piling and causeway construction, and pre-cast slabs for the Mangrove Walk are all available on request ***