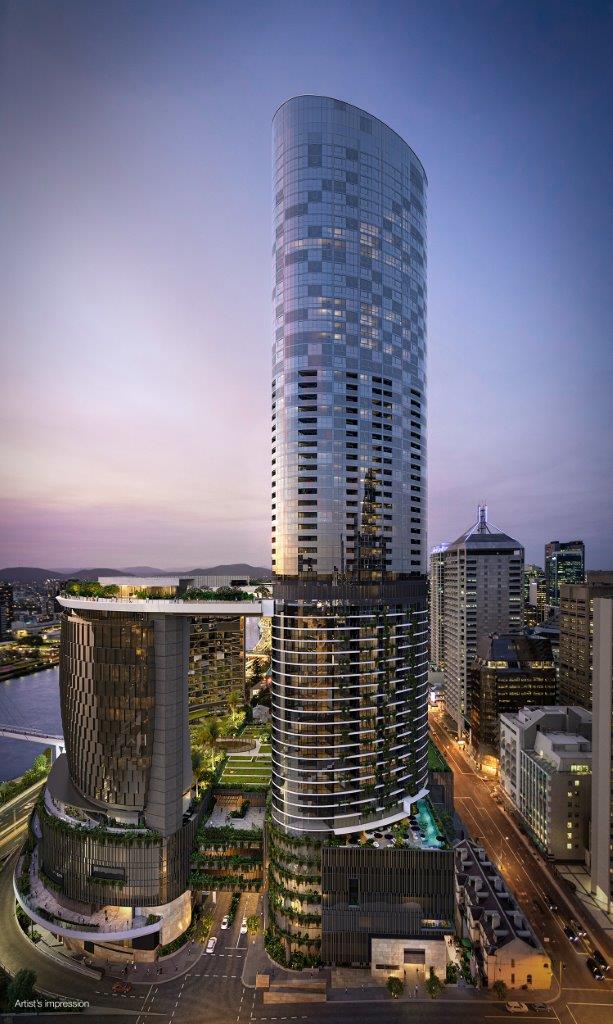 The first residential tower in the $3.6 billion Queen’s Wharf Brisbane development has become the fastest selling residential project in Queensland this year after attracting an unprecedented level of local buyer interest and selling 75 per cent of the 667 apartments within two months.

The 64-storey Queen’s Wharf Residences tower exploded into the market in March with an unprecedented 345 private appointments conducted by the Residential Sales Team in the first two weeks, and has now sold 610 or 91 per cent of the 667 apartments.Located within the birthplace of Brisbane’s European history, the Queen’s Wharf Brisbane development features one of the greatest collections of culturally significant heritage buildings and places in Australia, dating back to the early 1800s.

The nine heritage buildings will be carefully restored and transformed into new shopping outlets, restaurants and cultural experiences as well as spaces for events, entertainment and performances – one of the most popular drawcards for local buyers.

YPM Group Director and Head of Queen’s Wharf Residential Sales, Bryce O’Connor, said local buyers were attracted to the development because of the unique offering it presents.

“We know that the local market has been waiting for something quite special to come along. Queen’s Wharf Residences offers high-quality apartments in the centre of an amazing new lifestyle destination that will mix old with new in a way that hasn’t been done before in Brisbane,” Mr. O’Connor said.

“The heritage element of Queen’s Wharf was of strong interest to local buyers who appreciated the way the heritage buildings were being restored, repurposed and integrated into the precinct, and the fact that they can live above it, there really is nothing like it.”

Cottee Parker, the architects behind the design of Queen’s Wharf Brisbane, were charged with ensuring that the new and old blended seamlessly together.

“Queen’s Wharf is the link which connects the history of Brisbane, to the future of Brisbane,” said Naveen Dath, Director of Cottee Parker, and one of the architects behind the creation of the Queen’s Wharf precinct.

“What used to be a gateway and an entry portal to the colony, now has the potential to become the gateway to the future of Brisbane.”

Less than 60 apartments remain for sale on levels eight to 64 of the tower, offering a mix of one and three bedroom residences, and boasting views across the Brisbane River and South Bank, the 17-hectare heritage-listed City Botanic Gardens and the Story Bridge.

The success of the game-changing Queen’s Wharf Brisbane development continues to make waves in the industry, after it was named a finalist in the 2020 Urban Developer Awards in both Excellence in Marketing and Excellence in Community Engagement categories.

Queen’s Wharf Brisbane will transform the CBD with four new luxury hotels, more than 50 new bars and restaurants, up to 2,000 residential apartments and the equivalent of 12 football fields of public space when the development is complete.