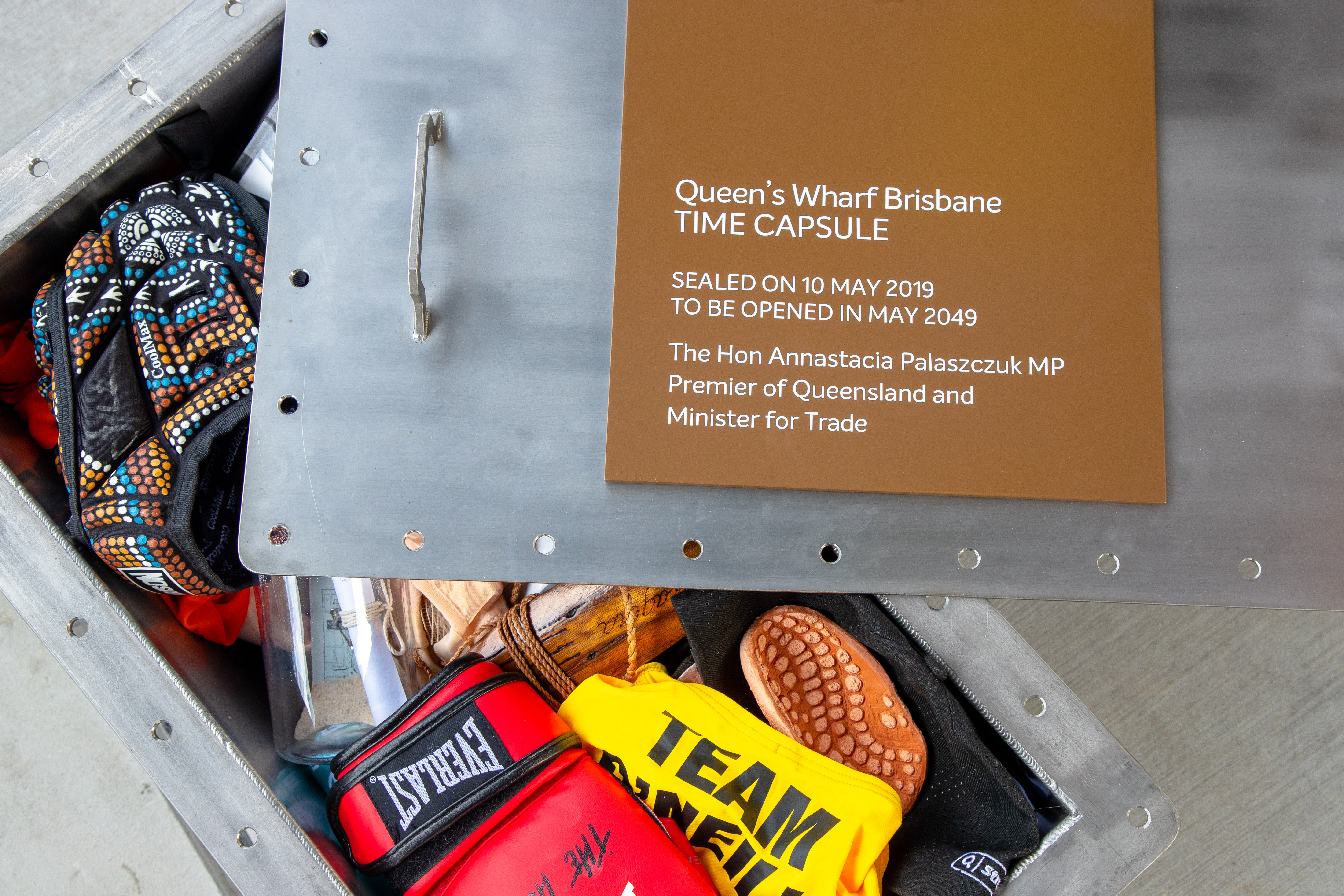 Queensland will be buried for 30 years before it is unearthed in 2049 for future residents to explore.

The time capsule – an initiative by Destination Brisbane Consortium including its lead partner, The Star Entertainment Group – will be buried in Waterline Park, one of the first public areas that will open later this year in the future $3.6 billion Queen’s Wharf Brisbane integrated resort.

“This is our first look at Waterline Park which, like the rest of the Queen’s Wharf development, will give us a new way of looking at our city,” the Premier said.

“It’s entirely fitting that we are enclosing a time capsule because the decisions we make today set up the Queensland of the future.”

The time capsule contains nearly 80 items – including personal mementos from some of Queensland’s biggest stars and local residents – such as fashion to family cookbooks; signed sporting memorabilia; and school posters predicting what the city will look like in 2049.

At the event, Premier Palaszczuk was the last to place her items into the time capsule – a photograph with volunteers from the Gold Coast 2018 Commonwealth Games, and a letter to the future residents of Brisbane.

Destination Brisbane Consortium Chairman and The Star Entertainment Group Chairman John O’Neill AO said the historic occasion was made possible thanks to the strong support shown for the once-in-a-generation development, expected to open in 2022.

“We always planned for the $3.6 billion Queen’s Wharf to be a world-class attraction to benefit all of Queensland and every Queenslander,” Mr O’Neill said.

“From its spectacular contemporary design to bespoke offerings and one-of-a-kind experiences, I hope that when our time capsule is unearthed in 2049, people will agree Queen’s Wharf has delivered on the promises we made.”

Mr O’Neill said he was delighted with the state-wide response that the time capsule had received across the sporting, arts and culture, entertainment, business, community, media, and government sectors.

“Brisbane is transforming with $15 billion-plus of major tourism and transport infrastructure projects expected within the next decade – so we’re pleased to capture its essence today through our time capsule,” Mr O’Neill said.

“For example, our time capsule features a fantastic video of a cyclist riding around Brisbane CBD and looking at all the streets that have projects currently underway, like Cross River Rail and Brisbane Metro.

“The views captured on this video will be remarkably different to the views cyclists will come to know in 2049.

“There are also some incredible sporting memorabilia – donated by a range of Queensland legends including Jonathan Thurston, Laura Geitz, Susie O’Neill, and Jeff Horn.”

The time capsule also contains 2019 technology such as a 3D print sample, USBs with mobile phone-created videos by Brisbane teenagers, and a mini robot donated by QUT.

All are expected to provide intriguing comparisons with the advancement in technology that can be expected by the time the capsule is unearthed in 2049.