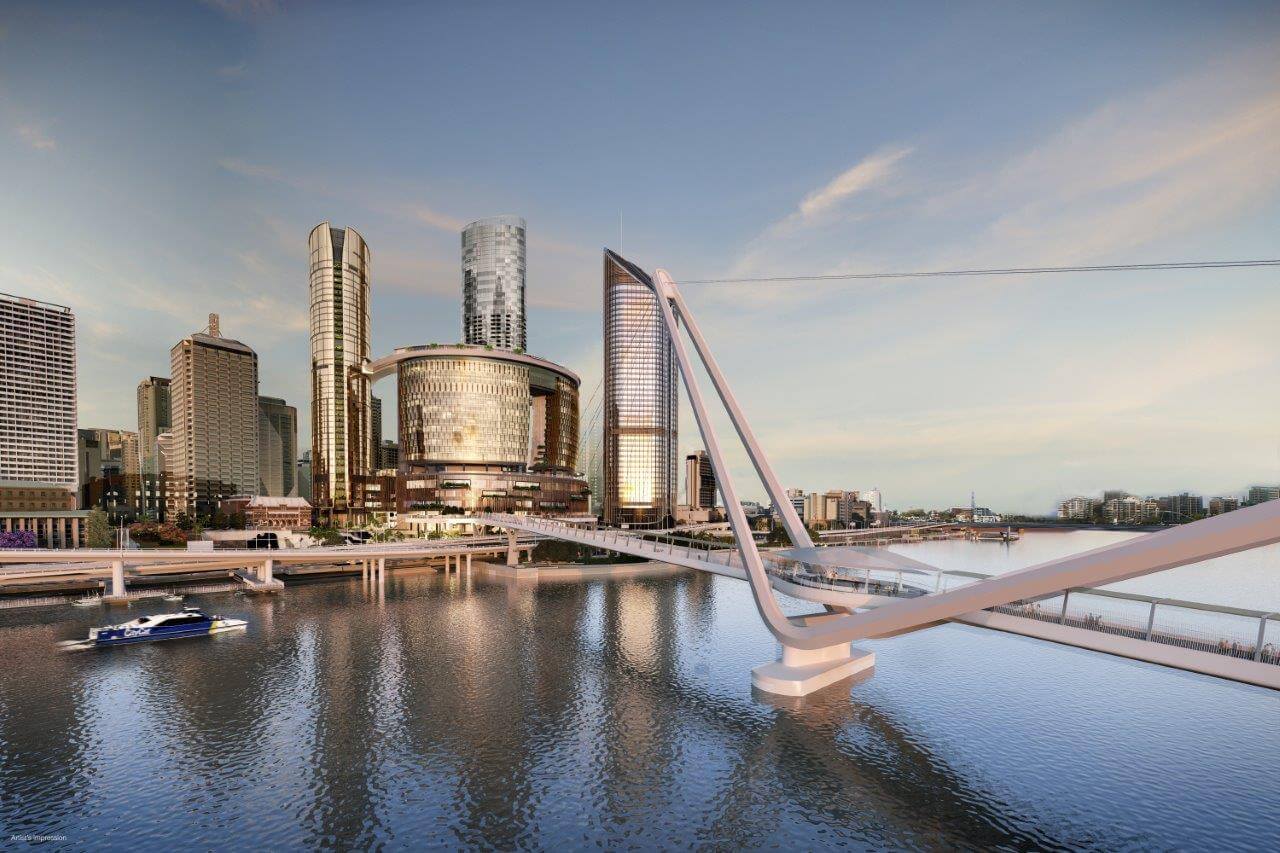 Preparatory works have stated on the eagerly awaited pedestrian bridge that will link two iconic Brisbane destinations and honour the first indigenous Australian elected to the Federal Parliament.

Four and a half years after Destination Brisbane Consortium won the right to transform Queen’s Wharf Brisbane via a $3.6 billion development, the Neville Bonner Bridge connecting the site to South Bank on the other side of the Brisbane River has now started construction.

Destination Brisbane Consortium Project Director Simon Crooks said the bridge would be the first built in Brisbane for more than 10 years and will deliver a fantastic outcome for the people of the city.

“The Neville Bonner Bridge will span 320-metres over the Brisbane River from the retail and restaurant level of the integrated resort development to the area in front of the Wheel of Brisbane at South Bank,” Mr Crooks said.

“Not only is the bridge architecturally stunning, but it provides direct connectivity from the four luxury hotels and residences within the integrated resort across to the entertainment and cultural precinct of Brisbane,” he said.

“South Bank Parklands is one of our city’s favourite attractions. It is loved by families and visitors alike. The addition of this pedestrian bridge will provide a safe and direct link between South Bank and Queen’s Wharf – the development that will become Brisbane’s newest tourist attraction.

“The bridge will also support activities between the CBD and the Brisbane Convention and Exhibition Centre and the bus and train transport hubs at South Brisbane.

“In preparation of future construction activities, we have been working with the Harbour Master, Translink and Brisbane City Council to ensure City Cats will also operate throughout the bridge construction.

“We have also consulted with the Wheel of Brisbane to ensure they can continue to operate as normal, despite their proximity to the construction area.”

The Neville Bonner Bridge will be a cable stayed bridge and at its highest point, the mast will tower 75-metres above the river, the same height as the top of the Story Bridge.

Construction of the bridge is being undertaken by Fitzgerald Constructions Australia, an Australian company specialising in bridge and maritime works.

“We are already working with Fitzgerald on The Landing works on the CBD side of the river, so it will be an easy transition for them into the bridge works,” Mr Crooks said.

“Fitzgerald has already begun site establishment with fencing around the Cultural Forecourt, and in the coming weeks worker crib sheds will be installed. Further fencing work is also planned for the construction area in front of the Wheel.

“Once the fencing is complete, the Fitzgerald team will begin site investigations work for future relocation of services.

“Piling, which is the most visual activity, won’t occur on the South Bank side until about mid-2020.”

The bridge will be complete in 2022 and open with the Queen’s Wharf Brisbane integrated resort in late-2022.