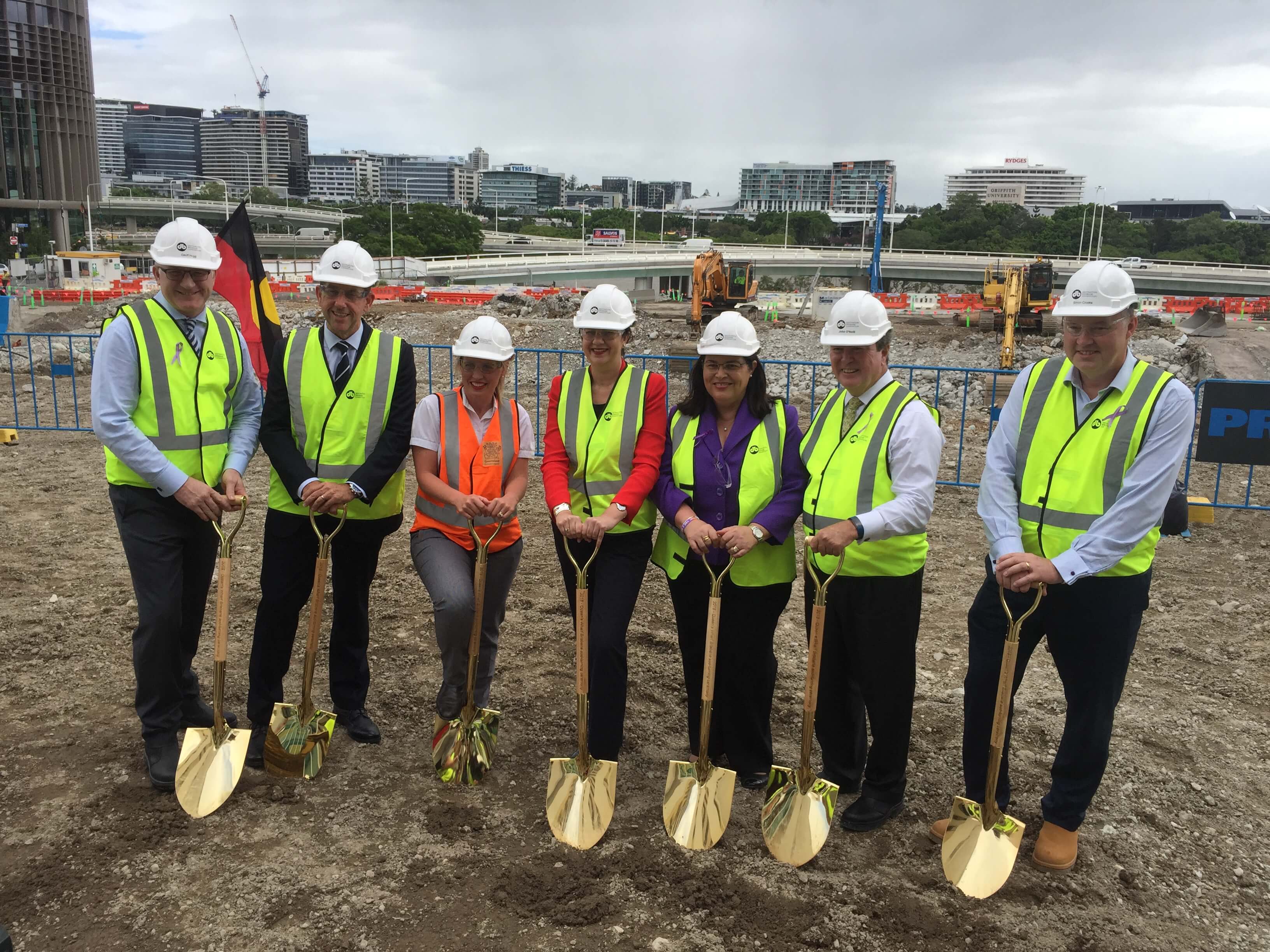 Around 450,000m3 of material will be removed over the next two years, which will then be followed by foundation work to construct five basement levels with car parking to service the tourism, entertainment, and resort development that is set to transform the CBD.

“Queen’s Wharf Brisbane will be a truly spectacular and game-changing development for the city, and for Queensland,” Mr O’Neill said.

“It will be Australia’s best integrated resort, a world-class destination competitive with anything on offer in the Asia Pacific region, to attract domestic and international visitors who will contribute substantially to the Queensland economy.

“Queen’s Wharf Brisbane will bring significant economic benefits with 2000 jobs during peak construction and 8000 roles once the precinct is operational.

“With our Hong Kong partners, Chow Tai Fook Enterprises and Far East Consortium, we are very confident in the tourism outlook for south-east Queensland.

“Together, we have projects and plans in Brisbane and on the Gold Coast which represent nearly a third of the total $14 billion of Queensland tourism infrastructure projects in the pipeline between now and 2022.

“However, there is much to be done before the expected opening in 2022 and we’re excited that our project team and appointed contractor can now begin the next phase – excavation – following demolition works and the State Government’s approval of our Plan of Development.”

“We are pleased to reach this next stage of piling and excavation after 12 months of demolition work,” Mr Crooks said.

“The excavation pit will be dug where the Executive Building, 80A George St building, and the Neville Bonner Building used to be, and underneath the section of William Street between those previous government sites.

“The perimeter of the pit will be more than half a kilometre and at its deepest point will be 26 metres below George Street.

“Later this year we expect to go to tender for the next immediate phase of the project – construction – as we will need to start on foundations at the bottom of the excavation pit in order to build the five basement level structures for thousands of cars to park at our integrated resort.

“Throughout excavation, and all phases of this project, the priority for us is working closely with our appointed contractor to reinforce our stringent safety standards, as well as minimising disruption for Brisbane commuters, cyclists, pedestrians, and inner-city residents.

“We look forward to continuing to update near neighbours, the community and all who are interested in this development through our community engagement program which includes free e-news and construction notices, which people can subscribe to receive from our website.”

Mr O’Neill said recent findings from CSIRO research, commissioned by the Queensland Futures Institute and The Star Entertainment Group last year, showed tourism was an emerging area of economic opportunity for the state.

“The number of Chinese visitors to Australia alone is forecast to increase threefold to 3.9 million by 2026.

“However, it also reinforced that the tourism sector cannot be complacent and significant, ongoing investment is required.

“We also need authentic, varied, and most importantly, quality offerings to differentiate this state and country from the rest of the world.

“That takes investor confidence – and it also creates jobs – and along with our Hong Kong partners we hope to continue to be part of a broader evolution of Queensland’s tourism sector, now and in the future.”