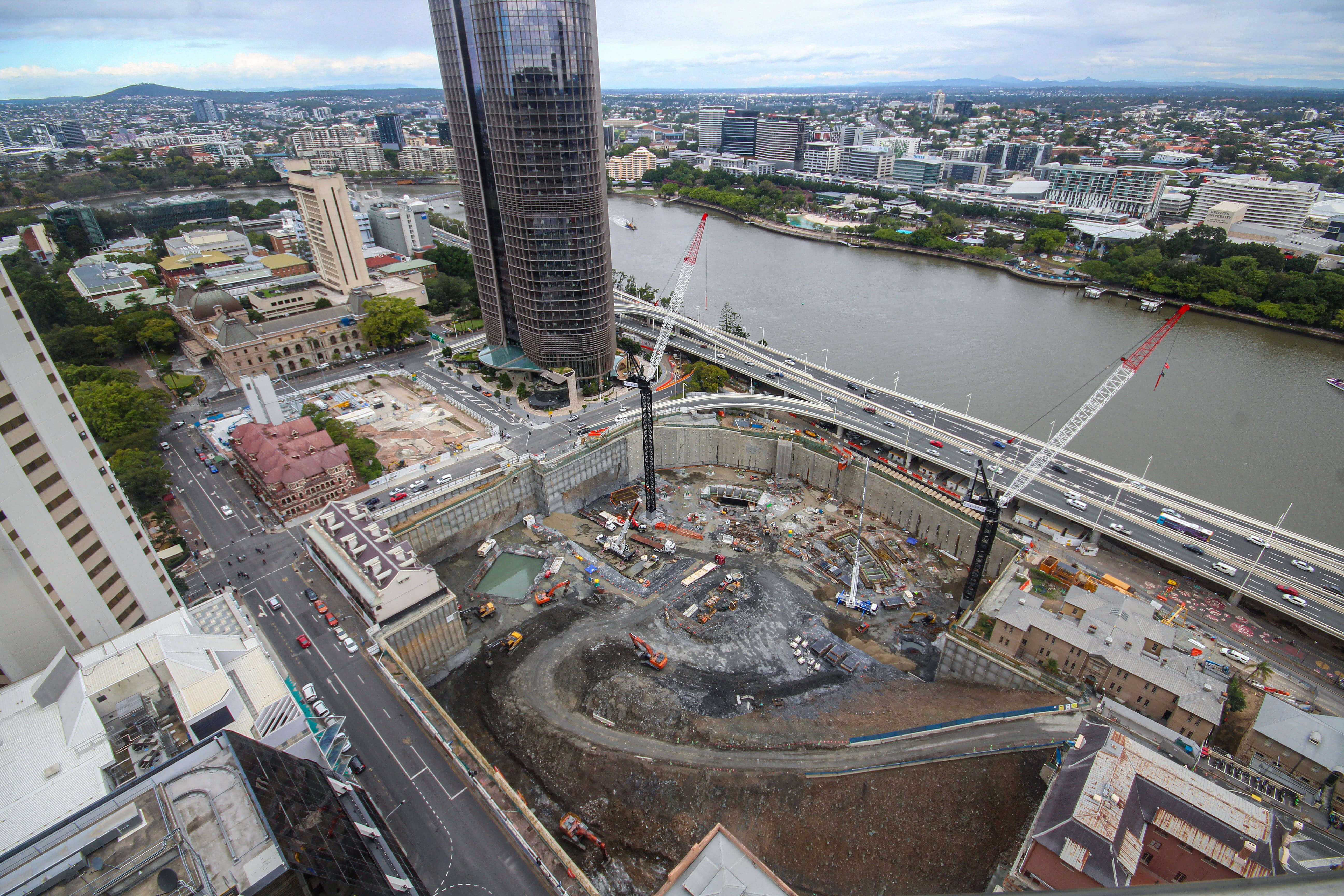 The Brisbane skyline is transforming and the latest milestone is the introduction of a new tower crane for the Queen’s Wharf Brisbane site this weekend.

On Saturday, the first of up to 10 new tower cranes that will grace Brisbane’s skyline in the next six months has gone up on the site that is set to revolutionise the CBD and river’s edge.

The tower crane marks a shift in phases at the $3.6 billion Queen’s Wharf Brisbane development as the work transitions from excavation to construction of Queensland’s largest basement and underground carpark.

Development and the tower crane is a preliminary activity before they take control of the site during July.

“This is another exciting milestone in what has been two and a half years of demolition, services relocation and excavation work,” Mr Crooks said.

“The skyline is set to change over the next six months as we expect Multiplex to erect up to 10 tower cranes within the main site.

“This first tower crane is positioned beside Tower 2, between Queens Wharf Rd and William St and will be used to build one of the two hotel towers for The Star Grand Hotel.

“Next weekend, a second tower crane will go up adjacent to Tower 3, the second The Star Grand Hotel tower, closer to Margaret St.

“The ramp that is currently used to access the site will be removed in the coming weeks and these tower cranes will become necessary for moving materials and equipment in and out of the site as we get things moving with construction.

“It will be around the end of 2020 that you’ll be able to see the construction works reach George Street level with the first stage of the IRD (integrated resort development) ready for completion in late-2022.”

Probuild who has been onsite since January 2017, will finish their excavation contract in July after removing close to 400,000m3 of material from the site, much of which has gone to Brisbane Airport for reclamation work and to build the BNE auto mall.

“The Consortium is grateful to Probuild for their professionalism and hard work during the demolition of the three non-heritage government buildings and excavation and shoring works,”
Mr Crooks said.

”They have worked in very well with the changing environment enabling a smooth transition from one contractor to another.”

The Multiplex contract is currently being finalised and remains subject to DBC board approval and State Government endorsement and includes the integrated resort development shell and core and the iconic Sky Deck.

Queen’s Wharf Brisbane will transform the CBD with four new luxury hotels, more than 50 new bars and restaurants, 2,000 residential apartments and the equivalent of 12 football fields of
public space when the development is complete.