Brisbane is changing with colourful billboard to promote city growth 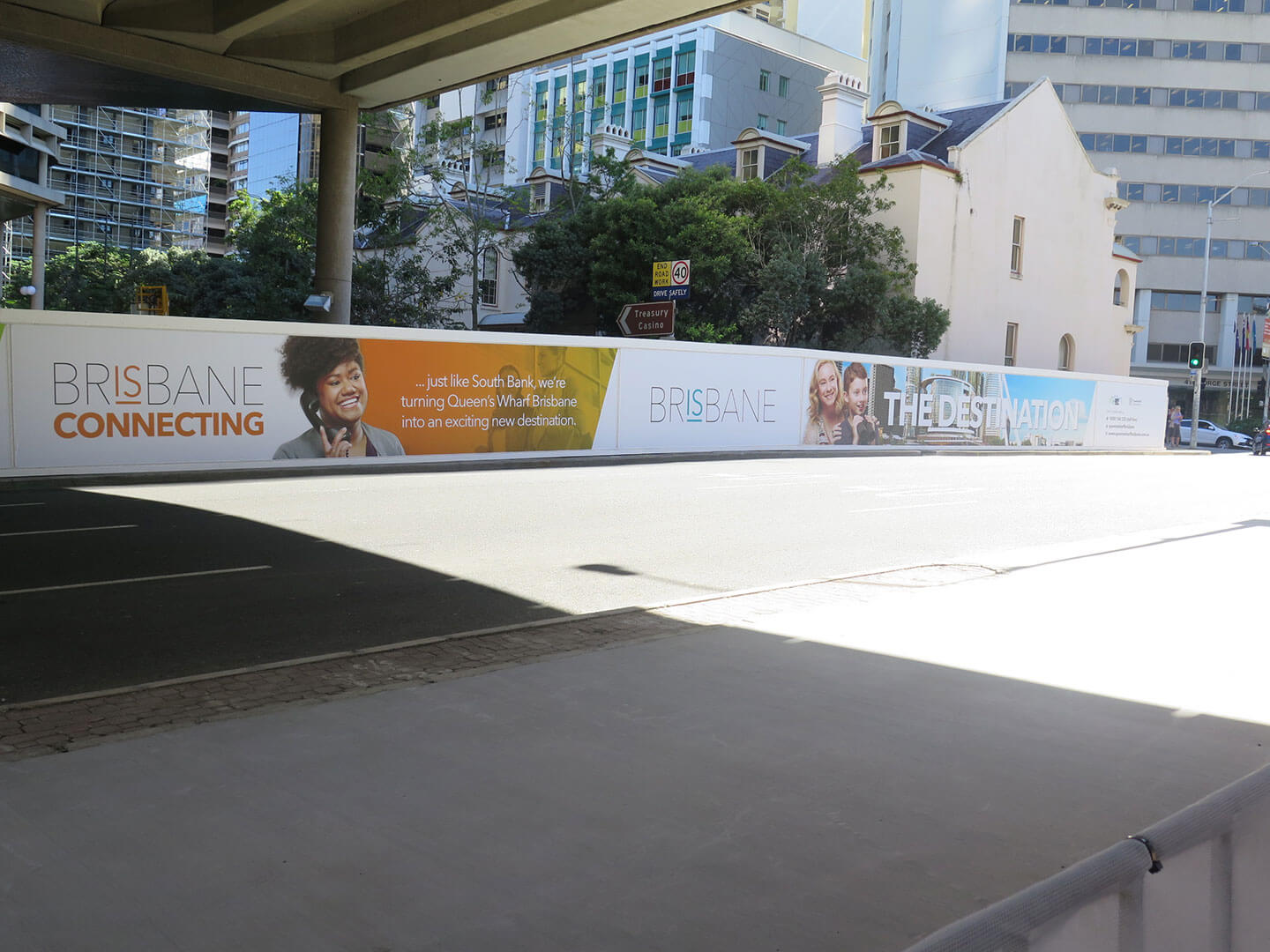 Today, the Queensland Government joined Destination Brisbane Consortium – and lead partner The Star Entertainment Group – to unveil the first panels along Margaret Street of the 2.4-metre-high permanent timber hoarding that will replace the temporary mesh fencing installed earlier this year.

Destination Brisbane Consortium Project Manager Katrina Face said the purpose of the hoarding was not only as an important safety and security barrier to protect workers and the community during construction, but to engage locals and visitors about the future world-class development.

“Safety is our top priority, however, we also understand the importance of keeping people informed and engaged about this development,” Mrs Face said.

The Star Entertainment Group Managing Director Queensland Geoff Hogg said the hoarding creative was especially designed with a key message in mind – that Brisbane is changing and growing.

“There are some exciting tourism infrastructure developments currently underway in our city such as Brisbane Airport’s second runway, Howard Smith Wharves, and a proposal for a new mega cruise ship terminal at the Port of Brisbane,” Mr Hogg said.

“Queen’s Wharf Brisbane is part of that transformation and will put Brisbane’s name up in lights and be recognised internationally as a top destination to visit.

“We want to bring locals and visitors on the journey, so they can picture an exciting new future – one that is open for everyone and is entertaining, restoring valuable heritage and developing exciting new offerings.”

Mr Hogg said the people featured on the hoarding were Brisbane locals and included employees at The Star Entertainment Group and the consortium team.

“These faces help showcase the diverse jobs that this development is providing today and into the future,” Mr Hogg said.

“Queen’s Wharf Brisbane will deliver significant economic benefits for Queensland including more than 2000 jobs during the peak construction period and 8000 jobs once fully operational.”

The consortium currently has a project team of about 25 people. From archaeologists to website developers, it has also engaged more than 80 external firms to date, resulting in hundreds of jobs.

Meanwhile, there are currently 145 people working on the project site today from both the appointed enabling works and demolition contractor, Probuild, and a range of subcontractors (see list below).

By the end of the year, and subject to state government approvals, the site is expected to be ready for excavation works to begin in 2018 for the underground car park.

Mrs Face said over the coming weeks, the hoarding will continue to take shape around the site perimeter onto George Street and along part of the Bicentennial Bikeway underneath the Riverside Expressway.

“Once the full master plan for the Queen’s Wharf Brisbane Priority Development Area is approved, the hoarding will then go up around the entire development area,” Mrs Face said.

“The images and storyline will be refreshed during the build to help keep people up-to-date with what’s going on behind the fence as the development progresses.”

Meanwhile, the consortium is preparing for future demolition work of the Margaret Street overpass, which will require the Easter long weekend closure of Margaret Street, between George and William Streets.

“During the Easter break, when CBD traffic is greatly reduced, scaffolding and gantries will be assembled around and under the Margaret Street overpass which links the 80A and 80B George Street buildings,” Mrs Face said.

“The entire structure – one of three non-heritage buildings earmarked for demolition – will be safely and carefully removed leaving only the concrete overpass bridging beams across Margaret Street, which we expect to remove mid-year.”

To keep informed about the development, please visit www.queenswharfbrisbane.com.au where you can subscribe to receive free news and construction updates, or follow the Queen’s Wharf Brisbane Facebook page.