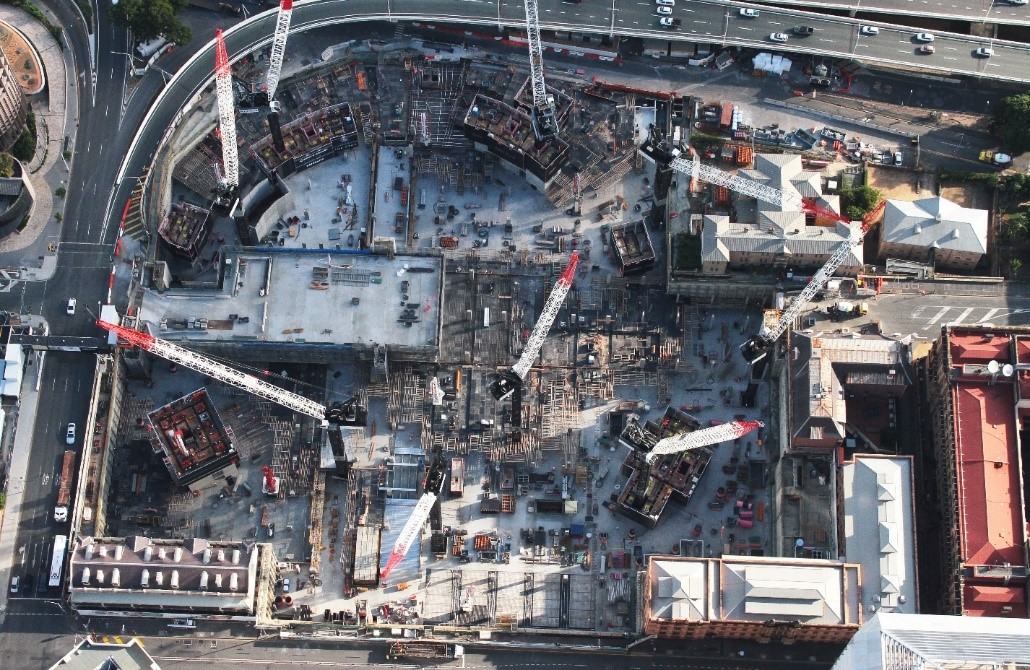 Progress at Queensland’s largest construction site will now be more visible to the people of Brisbane as the four towers of the integrated resort start rising from the basement.

The tallest of the four towers, Queen’s Wharf Residences on the corner of Margaret and George Streets, can now be easily identified with its lift core wrapped in branding.

Destination Brisbane Consortium Project Director Simon Crooks says the Residences’ tower will be the tallest of the four but it will likely be other architectural elements that most catch the public’s eye.

“First thing I’d like to say is thank you to the workers on site who are continuing to build Queen’s Wharf while following the government’s COVID-19 guidelines and applying social distancing rules,” Mr Crooks said.

“The four towers that will house three new luxury hotels brands and the 667 Queen’s Wharf Residences are now more noticeable with their lift cores being fitted with creative branded wraps.

“The Residences, which have been selling strongly since their launch at the start of the year, will move steadily skyward to reach 240 metres during 2021.

“With more than 500 of the Residences sold people can still purchase a piece of history in this most sought-after Brisbane location through a private one-on-one visit to the Residences display suite or a virtual tour inspection.

“But it’s The Star Grand Hotel towers facing South Bank and overlooking the Riverside Expressway that will be most prominent. These two towers make up the river facing side of the integrated resort and form the platform for the Sky Deck that will sit more than 100 metres above street level.

“The Star branding will be clearly shown on the two South Bank facing towers. These towers will include more than 330 new 5-star hotels rooms, along with new world-class gaming facilities to replace the 25-year-old Treasury Casino.

“Tower 1 situated behind the old Printery heritage buildings between George and William Streets will climb to close to 200 metres and house the 4.5-star Dorsett Hotel in the lower half and the 6-star luxury Rosewood Hotel in the top half of the tower.

“Nestled between and under the four towers will sit seven levels of podium containing high-end retail, restaurants, bars, conference and gaming facilities. At the heart of the resort and sitting on top of the podium levels will be an open-air green space with outdoor movie screen, event space and pop-up market facilities.”

The five levels of car park basements are close to completion with William Street expected to be re-established by July and open to construction traffic only.

“Prior to that we excavated close to 400,000m3 of material, of which 90 per cent was recycled, to build the largest basement in Queensland,” Mr Crooks said.

“As we look ahead, 2020 will be an amazing year for this development and the people of Brisbane will really start to see the immensity of what we are creating for this city.