Margaret Street overpass to be removed as demolition progresses 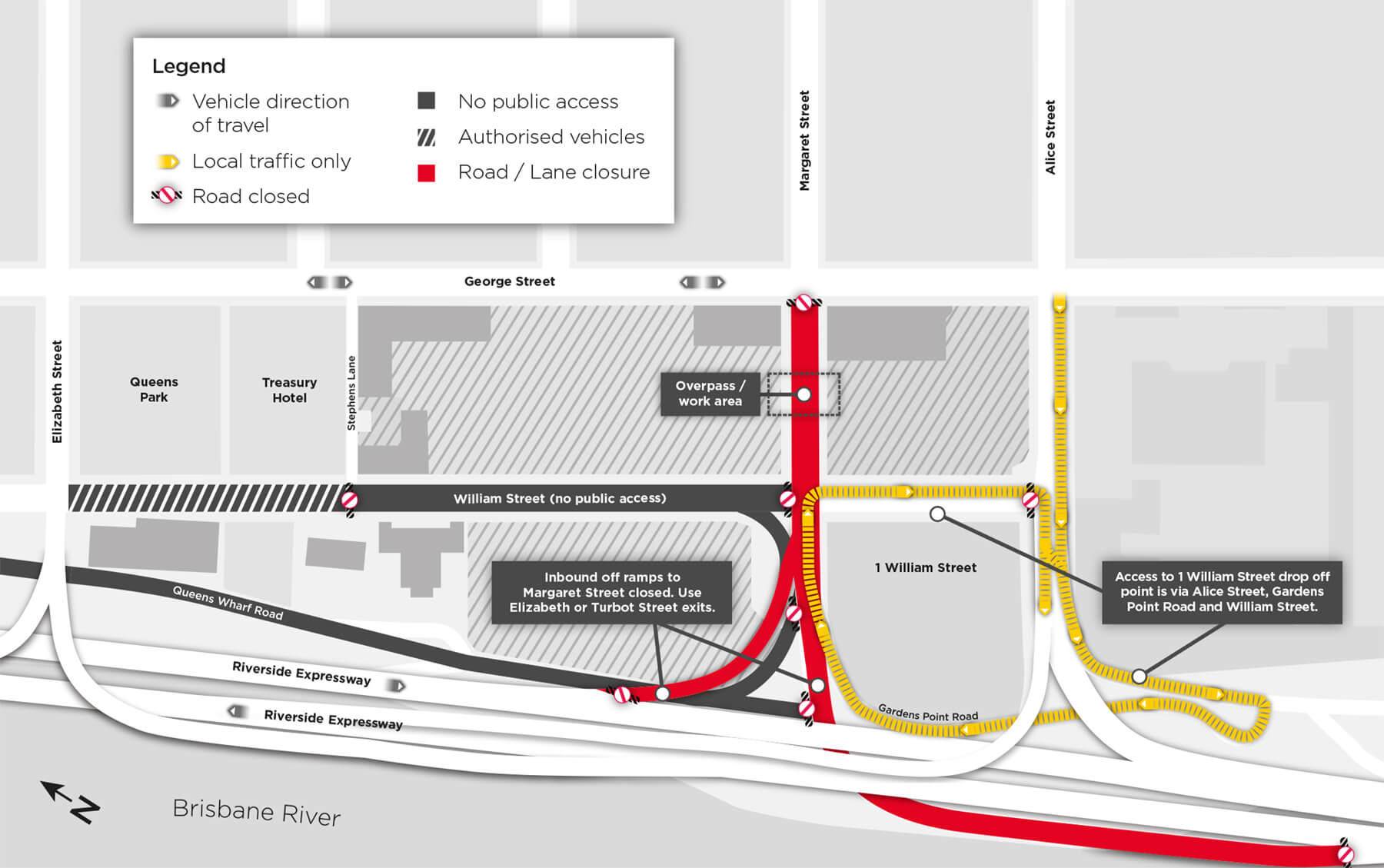 Further critical work will take place over the coming months to clear the Queen’s Wharf Brisbane site for future excavation and construction works on the $3billion transformational development.

Demolition work continues on the three non-heritage ex-government buildings with a major piece of demolition commencing this weekend and running for up to seven weekends.

Destination Brisbane Consortium Project Director Simon Crooks thanked the community for their support and patience while the largest development in Queensland’s history was being built.

“Over the last six months’ work has been occurring both within our site boundary and in the surrounding streets, and during that time, we have been working closely with our near neighbours and the community to ensure they were well informed ahead of work activities occurring.

“The time has now come to remove the 40 tonne concrete beams that support the Margaret Street overpass.

“To enable this work to occur safely, and starting this weekend, temporary road closures are required.

“The decision was made to only do work on weekends when traffic in the CBD is at its lowest.”

For up to seven weekends between 21 July to 11 September (excluding the Bridge to Brisbane fun run weekend) from 8pm Friday until 4am Monday, the Margaret Street off-ramps and section of Margaret Street up to George Streets will be closed.

Mr Crooks said the same road closure occurred over the Easter long weekend while demolition contractor Probuild coordinated the installation of scaffolding and gantries around and under the Margaret Street overpass.

“Destination Brisbane Consortium and its demolition contractor Probuild has worked closely with government and transport authorities to ensure these closures are well communicated and have the minimum impact on motorists,” he said.

The Riverside Expressway Margaret Street north and south bound off-ramps will be closed for the duration of the works with traffic management in place to direct traffic to alternative routes.

Vehicles wanting to access the CBD from the Riverside Expressway will instead need to exit at the Elizabeth or Turbot Street off-ramp.

Authorised vehicles and local traffic will be able to access and exit Queens Wharf Road and Gardens Point Road under traffic control while pedestrian access to and from 1 William Street and QUT will be via George and Alice Streets.

“The safety of workers, commuters, pedestrians, motorists, cyclists, locals and visitors will be crucial during construction of the project which is expected to open in 2022,” Mr Crooks said.