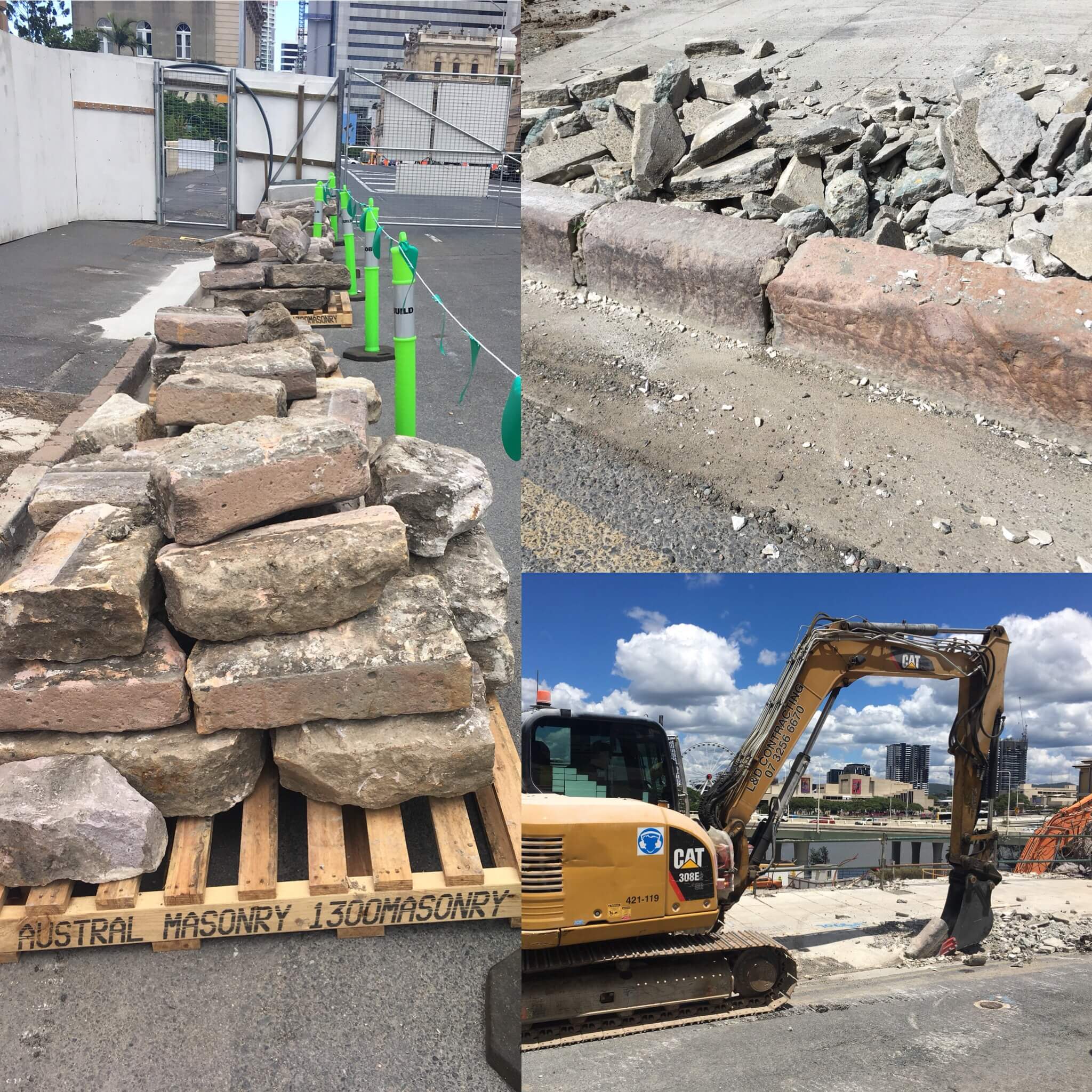 Approximately 80 metres of heritage kerbing along William Street, that were laid after the street was widened in 1938, have been removed under supervision of heritage experts and preserved for future re-use in the Queen’s Wharf Brisbane development.

“The original West Moreton Bay Penal settlement was laid out in a grid formation, and many of the modern streets of Brisbane’s CBD still follow that original town plan,” Mr Crooks said.

“A lot of the original materials used to build the streets are still evident around the city, including these kerbstones. This means that as the Queen’s Wharf Brisbane development progresses, we are uncovering historical evidence of how Brisbane was built and how it has evolved over time.”

Urbis Heritage Architect Stewart Armstrong said many of the streets in North Quay, including Margaret Street, George Street and Queen Street, followed the original alignment of the first surveyed roads constructed in Brisbane, and are listed on the Queensland Heritage Register due to their significant historical importance.

The majority of the heritage kerbing is made of Brisbane Tuff, which is a type of volcanic rock unique to Brisbane.

The stone has distinctive pink, green, blue-grey and purple hues, and was used to construct Brisbane’s most distinctive historical buildings, including the Cathedral of St Stephen, St Martin’s House and the Commissariat Store Museum.

Mr Armstrong said, “The kerbstones have a wonderful warm character due to the variations in their colour, size and texture.”

Brisbane Tuff was quarried from Kangaroo Point Cliffs by convicts as early as 1826, under instruction of Captain Patrick Logan, who was renowned for his strict, and oftentimes cruel, treatment of convicts sent to the penal colony.

The quarry was later operated by Brisbane’s first Lord Mayor, John Petrie and eventually closed in 1976.

Mr Crooks said, “While the stones were originally hewn by hand, the modern process involved removing the kerbstones with a small excavator, under supervision of a qualified heritage architect.”

“The heritage kerbstones have been included in the design of Queen’s Wharf Brisbane and will be reinstated as construction progresses,” he said.

“These unique kerbstones are the foundation of modern Brisbane, and it will be fantastic to see them incorporated into the next chapter of Brisbane’s evolution,” said Mr Crooks.