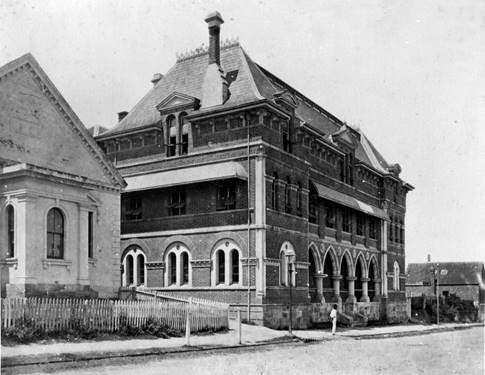 Queen’s Wharf Brisbane will become a global destination within our beautiful city – a place to stay, play, and enjoy any day of the week – but it hasn’t always been the case with controversial events taking place during its time as a former government precinct.

The heritage-listed former Government Printing Office was used to print Hansard, the official report of the proceedings of the Houses of Parliament, but in later years printed stamps, Government Gazettes, and text books as well.

With the growth of the colony and new demands, the original building no longer met the needs of the growing colony and was demolished.

A new office was built in William Street opening in 1874.  It was built on land which previously housed the residence of the Commandant of the Moreton Bay Penal Settlement.  It was described as “a massive structure of red brick…in which is an ample plant, occupying some hundreds of people engaged in the execution of the printing of the colony”.

It was situated between George and William Streets from 1862 and 1983 and comprised a number of buildings.

In November 1917, the military raided the office to seize copies of Hansard, which the Federal Government did not want circulated as they covered Queensland Parliamentary debates on military censorship and conscription.

At the time, former anti-conscriptionist Queensland Premier Thomas Joseph Ryan made a speech in Parliament about the conscription referendum, leading former pro-conscriptionist rival Prime Minister Billy Hughes to ban the speech from being published in the newspapers.

In turn, Premier Ryan ordered thousands of extra copies of Hansard to be printed and delivered to every home in Queensland, prompting Primer Minister Hughes to order a raid of the office.

At the raid, federal officers were met by a state policeman who refused them entry warning that inside the office was ‘a garrison of state police determined to uphold the Sovereign rights of the State of Queensland.’

However, having determined that the offending Hansards were either removed or hidden, the government printer invited the officers to search the premises but nothing was found.

The following year, the military took temporary control of the office to stop statements made in the Queensland Parliament about the treatment of Irish and German internees being released.

Changes to the site continued before and after World War II.

Today, the site consists of two buildings: the building facing William Street was constructed from 1872-1874; the building along Stephens Lane from 1884-1887; and the three-storey extension to the Stephens Lane building was built along George Street between 1910-1912.

In 1983, the office moved to new premises in Woolloongabba, and a decade later the William Street building was remodelled for use by the Public Service Club.

In 2005-06, the George Street wing was renovated for use by the Registry of Births, Deaths, and Marriages.

This year, both buildings closed to enable the safe construction of Queen’s Wharf Brisbane, and will be restored and repurposed for a transformational re-opening in 2022.

*Special thank you to the Royal Historical Society of Queensland for the historical information provided in this article.