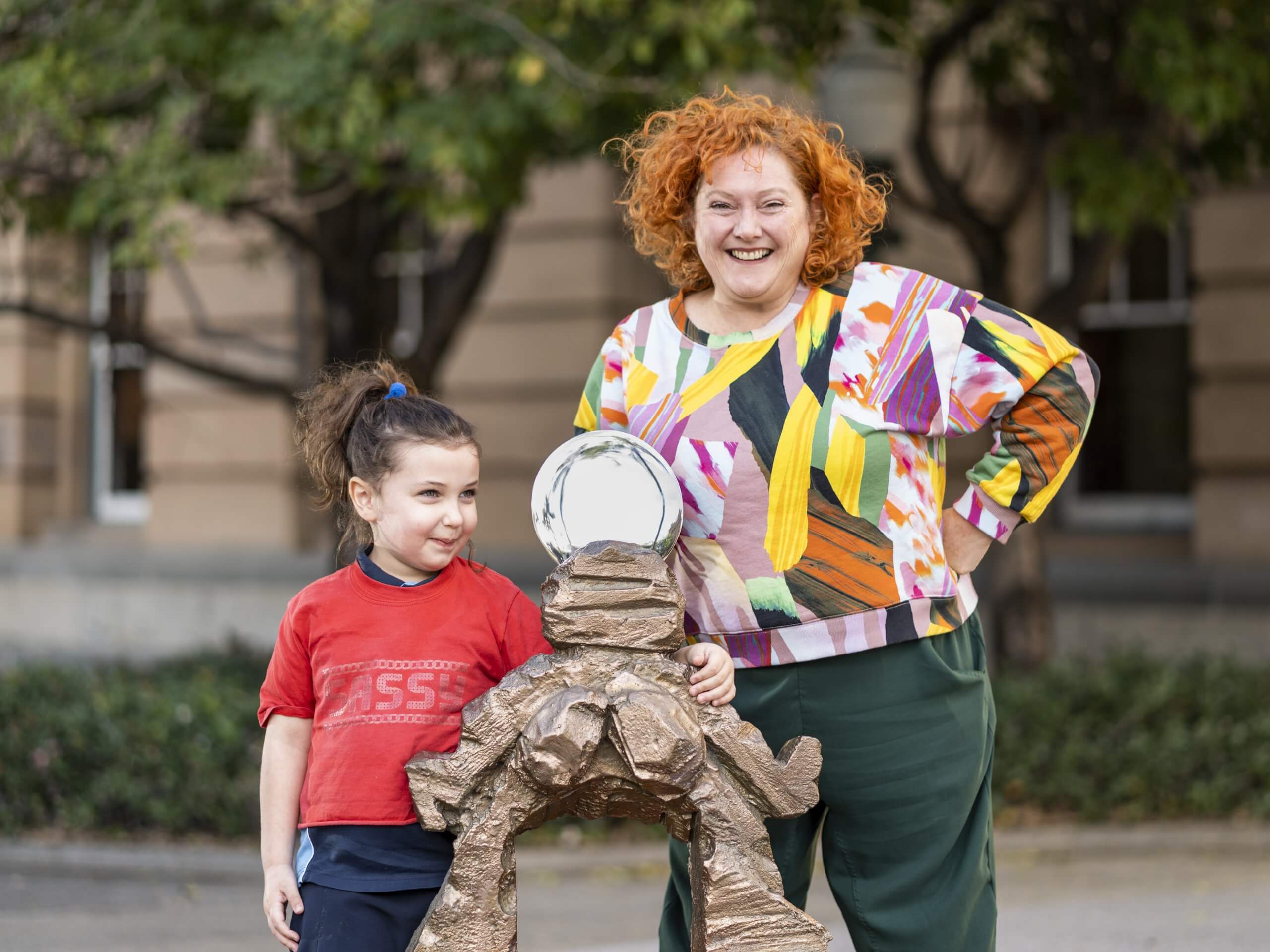 A larger-than-life five tonne goddess-like bronze sculpture is the latest artworks to be unveiled as part of the multi-million-dollar public art pipeline for the iconic $3.6b Queen’s Wharf Brisbane.

Known for her focus on the body as an art form, Brisbane based creative Justene Williams, said her five-year-old daughter Honore’s fascination with tiny toy figurines, inspired the almost five metre upscaled version of a superwoman, titled Sheila.

“My daughter is interested in superheroes and loves her plastic figurines, so I took that and gave the sculpture gravitas,” Ms Williams said.

“I love to go big so this will be a giant monument to the female form,” she said.

“The name Sheila riffs on the term used for an Aussie woman but it is also the female character carved in stone mainly in Europe from the 11th century, which has interpretations of protector, fertility and empathy and I wanted to immortalise those qualities.

“She will also feature a stainless-steel halo that is open to interpretation and self-reflection.

“The average person will see a big woman in a horse-stance with one arm open and the other closed fisted; some people may giggle at the busty representation but I’m hoping everyone will stop and look.”

A former dancer and cabaret performer, Justene Williams is an established artist over 25 years and is well known for her large-scale immersive live works, multi-channel video installations and photography.

“My work is often ephemeral, but this is permanent and I’m so excited for Sheila to be so prominent in such an important development for Brisbane,” Ms Williams said.

Sheila will stand at the Queen’s Wharf Plaza on the riverside of the existing Commissariat Store and is one of four artworks now announced for the 7.5 hectares of public space within the entertainment and tourism precinct.

The first and signature artworks, announced in February, is an eight-metre high, eight tonne bronze sculpture by internationally renowned artist Lindy Lee, to sit at the George Street entrance of the resort precinct.

While a high-tech interactive digital light installation for the heritage-listed The Printery Office by husband-and-wife team Alinta Krauth and Jason Nelson was green-lighted last month.

“I like to think of her being the guardian of the Plaza, who will watch over the millions of visitors to Queen’s Wharf Brisbane, including for the 2032 Olympic and Paralympic Games,” Ms Nowell said.

“The Arts panel felt she was a figure that everyone could relate to, from children to adults, as there is something playful about her, but her stance is empowered and impactful,” she said.

“A lot of the works are installation or site specific, but Sheila offers a contemporary twist on figurative sculpture and I think people will respond really positively to her.

“I hope she becomes a familiar and much-loved icon – perhaps a meeting place, where visitors can congregate under her larger-than-life physique.”

Ms Nowell said there were two First Nations artists and artworks, yet to be announced this year with the staged opening of Queen’s Wharf Brisbane commencing from mid-2023.

“This public art project is unparalleled in its ambition and the calibre of works by some of Australia’s most innovative contemporary artists will see Brisbane become an art destination.