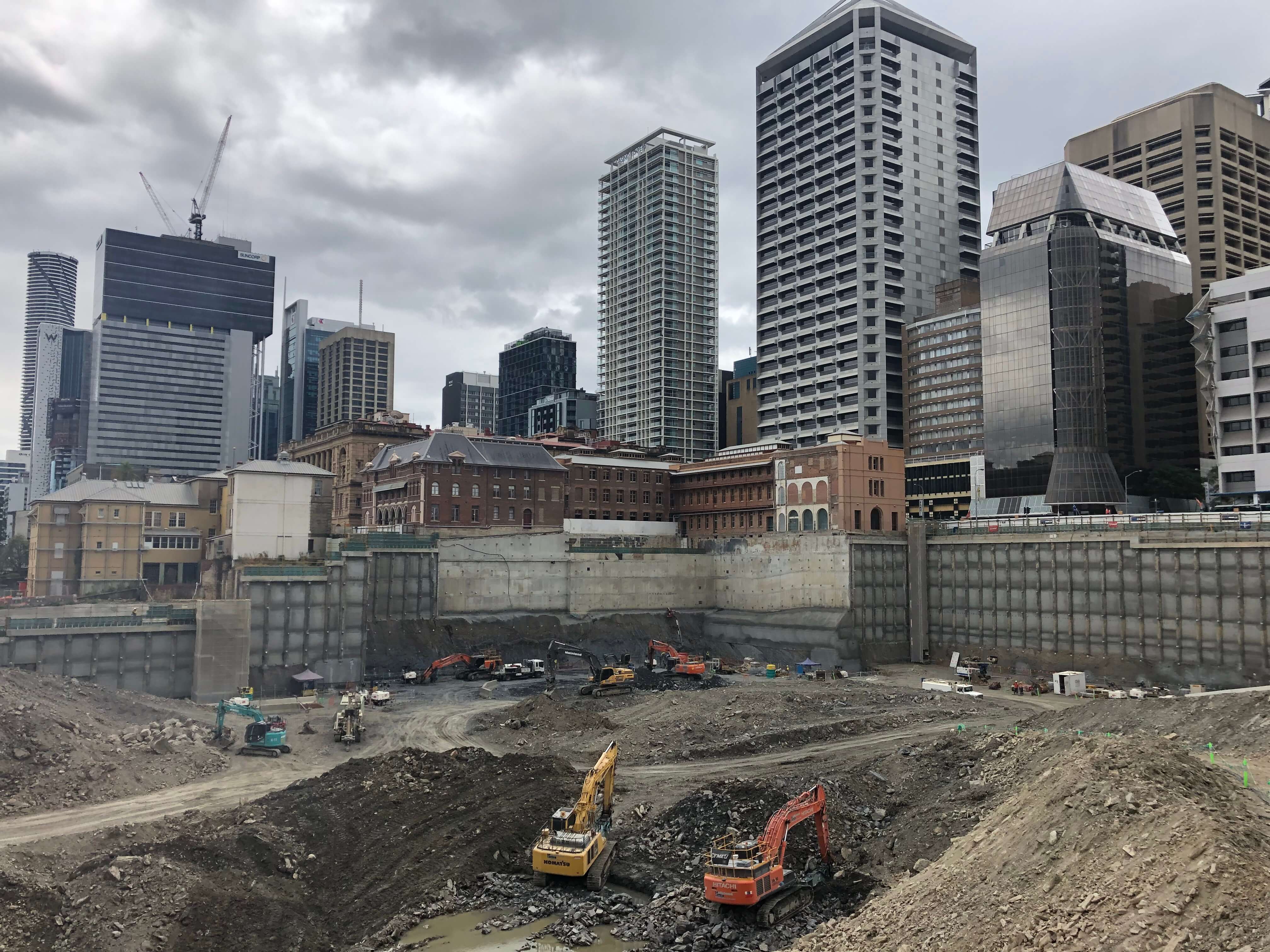 Nearly one year on since work began on the largest city-based excavation project in Queensland’s history, the site of the $3.6 billion Queen’s Wharf Brisbane integrated resort has rapidly changed with over 300,000m3 material already removed to make way for the future world-class precinct.

The Star Entertainment Group Managing Director Queensland Geoff Hogg said the changes to the CBD skyline on the north side of the Brisbane River was nothing short of extraordinary, with the excavation pit currently sitting at 22 metres, and expected to reach 26 metres at its deepest point.

“It’s hard to believe that two years ago this space held three government buildings, before being demolished and cleared for the next phase of excavation nearly one year ago on 8 March,” Mr Hogg said.

“Today, the area is a major working pit with the surrounding heritage buildings clearly visible and highlighting a bygone era that we look forward to bringing back to life through careful restoration and conversion into exciting dining, shopping, and cultural tourism offerings in the future.

“According to Tourism Research Australia, international visitor numbers to Queensland are already on the rise, up by five per cent in the year ending September 2018 to 2.8 million, with their spend also up by 12 per cent to $5.9 billion.

“Meanwhile, domestic visitor numbers to Queensland increased by three per cent in the same period to 22.8 million, with their spend up by 12 per cent to $17.6 billion.

“With the diverse range of premium dining, shopping, entertainment, and accommodation options on the way, we expect Queen’s Wharf Brisbane to generate an extra 1.39 million visitors per year to the state, and in turn, deliver a further $1.69 billion annual increase in Queensland tourism spend.”

Destination Brisbane Consortium Project Director Simon Crooks said the excavation work, which will see around 400,000m3 of material removed from the site, was on track to be completed around August this year.

“Towards the end of excavation, we will begin foundations at the bottom of the pit to enable the build of the basement, which will feature thousands of car parks for the precinct,” Mr Crooks said.

“The foundation work will be part of the tender for the main integrated resort, which will feature the construction of luxury and internationally-acclaimed hotel brands, The Rosewood and The Dorsett; and a double-tower The Star-branded hotel beneath our spectacular Sky Deck.”

Mr Crooks said there was an outstanding sustainability outcome for the project – about 90 per cent of the material from both demolition and excavation phases was being recycled, with Brisbane Airport Corporation (BAC) being the largest recipient.

BAC is recycling 50 per cent of the material for its Auto Mall.

“We are pleased to see this material, which has been significant in volume and therefore unique to our project, being recycled and reused to help build Brisbane Airport’s Auto Mall,” Mr Crooks said.

“So far, Brisbane Airport – through its contractors – has been able to recycle 40,000m3 of concrete from the demolition and 70,000m3 of fill from the excavation.

That represents about 16 and 28 Olympic-sized swimming pools of concrete and fill respectively.

“The concrete and fill are being used to support the Auto Mall’s land development works including spoil improvements; helping to make the drainage rock material required to build the working platform over the low lying site; and to build structural fill layers for the Auto Mall itself.

“Meanwhile, we’re also pleased to see the rest of the material from our pit – clean fill and acid sulphate soils – being remediated, recycled, and reused for land development works on other projects in the region.”

In 2019, Destination Brisbane Consortium is expected to award major tenders for the build of the Neville Bonner Bridge, and the main integrated resort.

Both tenders are currently undergoing a competitive tender process and a rigorous assessment period.